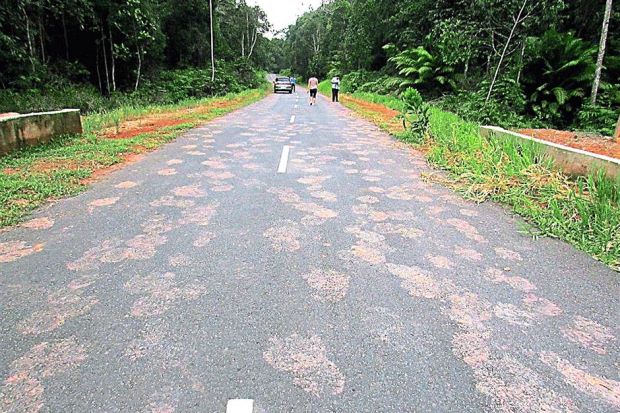 JOHOR BARU: It’s a strange sight indeed – three sets of muddy footprints, one set looking like it belonged to a tiger, another like it was an elephant’s and the last resembling a human’s but much bigger in size.

The trail of footprints that stretched close to 1km near the Endau Rompin forest reserve have retirees Sia Chwee Khim, 64, and her husband Lim Teong Kheng, 66, puzzled and very excited.

They believe the last set may be that of the mythical “Bigfoot”.

The couple, their daughter Joanna, 30, and a group of friends from Singapore decided to follow the tracks for more than 1km on May 10.

“It was just astounding – the creature or creatures had walked in the damp red soil and onto the tar road, leaving clear footprints for us to see,” said Sia, adding that the group took countless pictures and even measured the large footprints, which were about 48cm long and 11cm wide.

“We tried to mimic the steps but could not stretch our legs to match the distance of the stride.

“We also ruled out the possibility of the tracks being left by an elephant because they were quite oblong, like human feet, and had four protruding sharp toes,” she said.

The group was heading to Endau Rompin when they stumbled across the strange prints.

Sia explained that what baffled the group further was that the “Bigfoot” tracks were accompanied by those of an elephant and a tiger.

State Wildlife and National Parks Department (Perhilitan) director Hasnan Yusop said a team of officers conducted checks on the footprints and concluded that they probably belonged to an elephant.

“This could be a sluggish elephant which dragged its feet as it walked, resulting in an elongated print,” he said.

Referring to the prints of the elephant and tiger, Hasnan said the animals need not necessarily have been travelling together but could have used the same paths at different times.

The last time a supposed “Bigfoot” made the news was in 2005 when a group of workers claimed to have seen a huge furry creature in Kampung Mawai, Kota Tinggi. Advertisement. Scroll to continue reading.
In comparison: The difference in size between the large footprint and a human foot in Johor Baru.

The workers tried to pursue the creature but lost track of it.

They too reported discovering huge footprints measuring between 40cm and 50cm in the mud.

Johor Malaysia Nature Society chairman Vincent Chow said he received news of the “Bigfoot” prints the day it occurred, adding that it was quite impossible to be a prank because the footprints went on for more than 1km.

“It could be an upright bipedal primate that has yet to be discovered,” he said, adding that there had been many sightings of these footprints, especially by the locals, but the authorities often did not take them seriously.