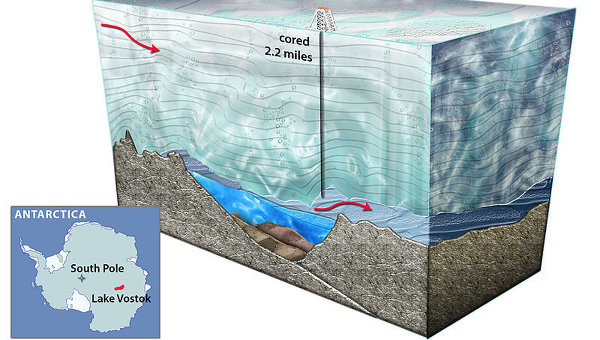 There is something alive in Lake Vostok, deep beneath the East Antarctic ice sheet, and we don’t know what it is. Water samples from the lake contain a bacterium that does not seem to belong to any known bacterial groups – although whether it truly is a new form of life remains to be proven.
Russian scientists breached Lake Vostok in February 2012, after years of drilling. The lake lies beneath 3.5 kilometres of ice, and has been cut off from the rest of the world since Antarctica froze 14 million years ago.
The Russians’ borehole was filled with lubricating kerosene, which contains bacteria – causing concerns that the lake might be contaminated. But the project seems to have avoided this. When the drill hit the lake, it automatically withdrew in response to the pressure change. Lake water gushed into the borehole, pushing the kerosene up the hole before freezing.
Since last May, Sergey Bulat of the Petersburg Nuclear Physics Institute in Russia and colleagues have been studying the water that froze onto the drill bit. “The samples proved to be very dirty,” he says, with lots of kerosene. Preliminary genetic analyses reported last October found bacteria from the drilling fluid, not the lake.
Bulat has now gone back to the DNA samples. Comparing their DNA sequences to a database of known contaminants, he identified short fragments of DNA belonging to 19 different known bacterial species. “All of them proved to be contaminants, or bacteria from human skin,” says Bulat.
A twentieth species is more unusual. The genetic samples show less than 86 per cent similarity to the known major groups of bacteria. That could mean it belongs to an entirely new division, says Bulat, although he concedes that it could just be a new species.