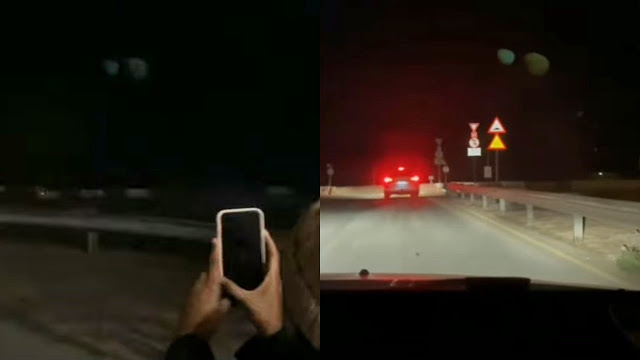 A very strange phenomenon appeared in the sky over Dubai at night. Residents of Dubai were amazed when they saw in the night sky two giant objects in space, similar to planets. Images of the mysterious phenomenon went viral on social media.

A few days ago, stunning images of two giant planets in the sky spotted over Dubai have circulated on the internet. We’re not exactly sure where this sighting may have been, but some people think it could be Al Qudra, in Dubai. If you didn’t see the “giant planet”, here’s what the strange phenomenom looked like:

Many assumptions have been put forward by eyewitnesses, such as the phenomena of a ‘Double Moon,’ a theory in which they believe that some planets can look as big as the moon because of the alignment between the stars lately.

Others suggest that these two objects are part of the Nibiru system or UFOs disguised as celestial bodies controlled by the mind. Apocalyptic predictions were also made. However, some people explained the appearance of objects as a hoax.

Some experts have stated that such alignments between the moon and other planets, like the one spotted in Dubai, are quite rare and only occur ONCE every 800 years.

One of the more ‘realistic’ explanations offered was balloons and a hologram. It is possible that the second explanation was also correct, since a day later the local authorities told the public that it was a presentation of holograms of the satellites of Mars, which some office arranged with the aim of showing in the future, the holographic Al-Amal – the UAE satellite sent to Mars by the Japanese:

With the help of new technology, Phobos and Deimos, two satellites orbiting the Red Planet, were projected onto the sky in Dubai.

Please note that the technology involved is relatively simple, but it looks more or less real. Imagine what opportunities the Blue Ray project has?

At the moment though, there is no definitive answer on what the residents of Dubai saw in the night sky but one thing’s for sure, this is all very strange.

Advertisement. Scroll to continue reading.
In this article:twin planets, UAE