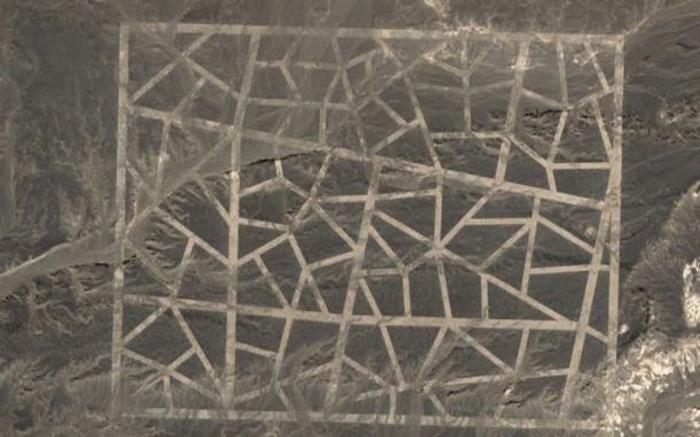 Is this part of China’s classified space program or another Chinese surprise?

For the first time, mysterious signs in the middle of the Gobi Desert, which is located in China, near the border with Mongolia, were seen in 2011. Seen, as is often the case in this century, using Google Earth. The program does not comment on the signs in any way, and no official reports from the Chinese government about exercises or tests in the Gobi Desert have followed.

There are several mysterious patterns, and each next one is even more mysterious than the previous one. Judge for yourself.

These two patterns resemble streets, only without houses, cars and shawarma stalls – in general, without everything that we are used to on the streets. Perhaps these street models were made in order to test weapons “in the city”. Then why not build houses? Or have the weapons already been tested, and this is all that remains of the “cities”?

In this picture, those with an inquisitive mind and keen eyesight will make out destroyed cars. But why are they here? Perhaps they participated in weapons tests. Or is it just a warehouse of disused vehicles? But then why do we need large squares in the picture?

Of course, this is the first thing that comes to mind. And the most logical thing, even if there is no hint of airplanes in this picture. Okay, let’s say these are really runways. But why then is the right stripe so defiantly glowing?

The most mysterious pattern of all. A circular one, consisting of stones or small structures, in the center of the pattern at the time of shooting there are three planes. Anyone who has flown an airplane at least once cannot help but wonder: where is the runway? Indeed, if this is a kind of air base, then where is the runway?

After the images were released, The Telegraph spoke with defense expert Tim Ripley. He authoritatively stated that the circular pattern resembles a test site for jet weapons, something similar he saw at Area 51 in Nevada.

Since the images with the mysterious signs were published, the Chinese government has not bothered to reveal the purpose of these objects. (It did work to block Google Earth in China, but it did not work.) Moreover, in 2018, another mysterious pattern was discovered not far from the patterns listed above.

The new pattern was studied in detail in a video with the explanatory title “No one can still explain what was found in the Gobi Desert.” This time we are talking about cross “runways” surrounded by incomprehensible glowing circles, vaguely resembling an infinity sign.

According to the author of the video, if these are runways, then they have never been used. In addition, there are several dozen structures next to the runway that look abandoned. And here is the video itself:

Advertisement. Scroll to continue reading.
In this article:China, Gobi desert