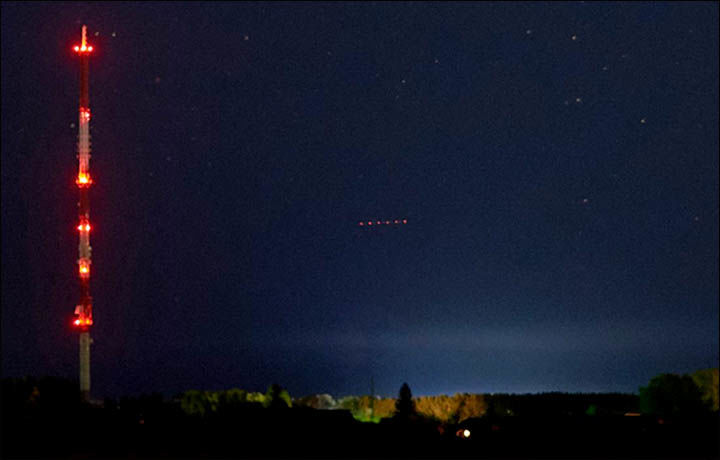 Photographs show red lights hovering about the ground and then moving vast distances in less than one minute.

An amateur photographer has captured pictures of what he claims is a ‘UFO’ after seeing strange red lights hovering above Omsk. Dmitry Yushkevich was taking images of his home city of Tara late at night on May 15 when he noticed six unusual-looking lights.

‘They were arranged one behind the other,’ he wrote on his Vkontakte page, after uploading the photos. ‘The first picture was taken at 12.49am.

‘Immediately, at 12.50am, I decided to take a second shot to ensure that the camera hadn’t made a mistake, or that there was some bug or glare [on the lens]. There is no official explanation for what the lights could be, although previously some experts have said that insects or glare on the camera lens, or satellites moving in space have been the cause of other supposed UFO sightings.

However, the Omsk region is known for its strange happenings including crop circles and numerous claims of unidentified flying objects in the sky at night.

Vladimir Krupko, head of the Omsk planetarium, said: ‘We have an astronomical camp in the Omsk region where we study the sky for about a month.

‘One time I went from the camp to a field for a walk and found a ‘vertetrav’ crop circle, with spirals that went to the side, slowly twisting. Wheat was put into these circles and were intertwined. For me, such a ‘vertetrav’ is a mystery and I cannot understand if it is connected with earth or space.’ He also said that in 1990 to 1991 UFOs regularly flew over Omsk, the first spotted by employees of the Omsk Synthetic Rubber Plant. They noticed an object in the sky with a ‘cloud of gas in the middle and two reddish lights on the edges’.

Similar objects were seen the same evening, including by a couple travelling on the motorway by car.

Mr Krupko said: ‘They saw a bright beam of light illuminating the ground. The woman said to her husband to slow down, and the object flew over the road, turned the beam of light on and lit them up. The car stalled.

‘On the edge of the object they counted 12 lights. It was hanging for half an hour and then flew to the south. Similar objects have been spotted by fishermen who suddenly found their watches running slow for a week.’

In this article:Omsk, Russia, UFO