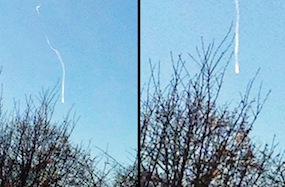 The object, which left a white trail as it plummeted to the ground Monday, generated 911 calls and reports of a downed plane. Suffolk County police looked into whether a small plane had crashed, but found nothing. Marc Rubin is among those who witnessed the object when it fell between Patchogue and Sayville. “It had this little curlicue tail at the top and was coming straight down at a 90-degree angle,” Rubin said Wednesday.

In this article:Long Island, mystery object