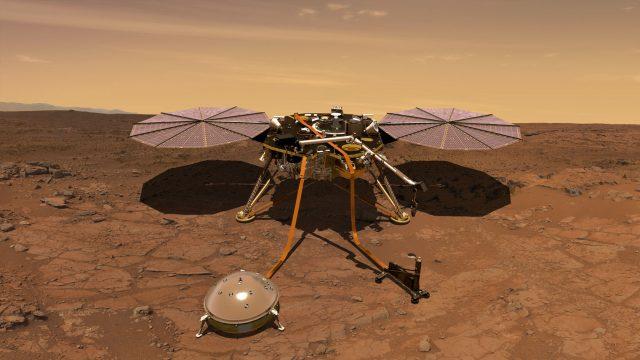 “The InSight fluxgate magnetometer has detected magnetic pulsations on the surface of Mars for the first time. The observations have implications to the wave sources in the induced magnetosphere and whether and how these waves can reach the surface.”

That type of report coming from your local police would cause some concern. Coming from the EPA or the military, it would be a cause for worry. Coming from Mars … it’s a mystery, but it’s definitely a sign of job security for space engineers. At the latest joint meeting of the European Planetary Science Congress and the American Astronomical Society, a NASA gave a presentation on findings by the Mars InSight lander, including the startling revelation that it has been detecting mysterious long pulsations at the Martian midnight. In addition, another presentation reveals that it found strange electrical signs that may be coming from a 2.5-mile-thick layer under the surface that just might be water. Finally, the InSight and its engineers are celebrating because the lander received an Emmy! Wait, what?

Artist depiction of InSight on the Martian surface (NASA/JPL)

“The nighttime continuous pulsations found by IFG are unexpected because they are distinct from what are typically observed on the Earth’s surface at the same local time. On the other hand, we have not found the Mars counterparts for many types of geomagnetic pulsations well known in Earth studies. We speculate that the observed magnetic pulsations by InSight to date are associated with fluctuations in the induced magnetotail and on the magnetospheric boundary. Under this scenario, the distinct field and plasma environment at Mars raises interesting questions about how these oscillations propagate through the magnetosphere and ionosphere and reach the surface.”

IFG is the InSight FluxGate, the magnetometer measuring the strength and variations of the surface magnetic field at the InSight landing site on the planet’s equator. The National Geographic story on the conference highlights the importance of InSight providing for the first time a surface analysis of Martian magnetism, which will help scientists determine why Mars lost its protective magnetic and perhaps reveal some warning signs as to if and when Earth might lose its own field. And why do these pulses happen at midnight?

National Geographic covered the second big story from InSight – it picked up magnetic signals from beneath the Martian surface that resemble those on Earth that indicate the presence of water … lots of water. That would bean that somewhere no deeper than 62 miles (100 km) is an aquifer or perhaps even a layer of water that can be drilled to from anywhere on Mars. Unfortunately, InSight’s drill only reaches 16 feet, so the first Martian well belongs to a future probe. If InSight is correct, it won’t need a diving rod.

What about the Emmy?

Oh, yeah. In a special presentation prior the big Emmy Awards show, the Academy of Television Arts & Sciences gave NASA the Outstanding Original Interactive Program award for its coverage of the Insight Lander’s entire life from conception to landing and beyond, using TV, social media and other methods to keep the world informed and involved with this exciting project.

When does the InSight show come on?

“Congrats to those who contributed to the news, web, education, television and social media coverage of this landing on the Red Planet.”

Does it sound like NASA Administrator Jim Bridenstine is more excited about the Emmy than InSight’s discovery of mysterious midnight magnetic pulses and a potential planet-wide water supply? Of course he is! InSight is never coming back to Earth so he gets to keep the statue in his office.

NASA showed the first images of Mars from the Perseverance spacecraft

NASA showed the first images of the surface of Mars taken by the Perseverance spacecraft, which landed on the Red Planet a few hours...

An unexplained wobble shifts the poles of Mars

The red planet sways from side to side like a whirligig when it loses speed. The new study allowed scientists to notice that the...