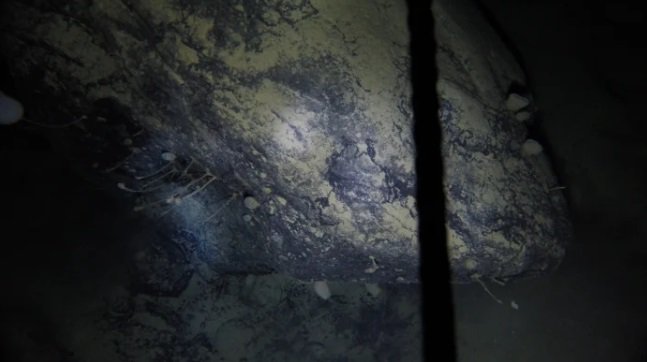 During the field work, the researchers drilled 890 meters of ice on the Filchner-Ronne shelf, located in the southeast of the Weddell Sea. At a distance of 260 km from the open ocean, in complete darkness and at a temperature of -2.2 ° C, scientists did not hope to see a rich variety of life, but the results of their work exceeded all expectations.

At the bottom 1,233 meters below sea level, researchers led by Hugh Griffiths of the British Antarctic Survey (BAS) found mysterious creatures. Among them was one sponge on a stem attached to a boulder at the bottom, another 15 sponges without stems, and 22 unidentified stem organisms that could be sponges ( Porifera ), ascidians ( Ascidiacea ), hydroid animals ( Hydrozoa ), barnacles ( Cirripedia ), phylums ( Cnidaria ) or polychaete worms ( Polychaeta ).

“Our discovery raises many more questions than it answers – for example, how did they get there? What do they eat? How long have they been around? How common are these boulders covered with life? Are these the same species that we see outside the ice shelf, or are they new species? And what happens to these communities if the ice shelf collapses? ”- Hugh Griffiths.

Floating ice shelves are a vast, unexplored habitat in the Southern Ocean. They cover more than 1.5 million square kilometers of the Antarctic continental shelf, and the already developed area, explored with eight other wells, is comparable in size to a tennis court.

Current theories about what kind of life can survive under ice shelves suggest that as you move away from open water and sunlight, all life becomes less common.

Previous research has found some small mobile scavengers and predators such as fish, worms, jellyfish or krill in these habitats. However, it was expected that filter feeding animals, dependent on food from above, would be among the first to disappear under the ice.

Therefore, it was a surprise for scientists to stumble on the bottom of the ocean, not on silt deposits, but on a stone. They were even more surprised by the video recording of a large boulder covered with strange creatures.

Most of life on Earth depends on the sun. Photosynthesis is at the very bottom of the food chain, with organisms such as plants and algae using sunlight to make sugars, while other organisms eat either plants or organisms that eat plants.

But in the dark depths, where sunlight never penetrates, living things use a different strategy. Around ocean hot springs, which emit heat and volcanic chemicals, bacteria use chemosynthesis to produce sugars that form the backbone of a similar food chain. A similarchemosynthetic ecosystem was previously discovered in Movile Cave in Romania.

The boulder investigated by Griffiths and his team is between 625 and 1500 kilometers from the nearest region of photosynthesis. Thus, it seems likely that the creatures living there rely on some form of chemosynthetic food chain, even if sponges are carnivorous (which remains to be determined).

The only way to know this is to conduct a more detailed study of the organisms and their environment. And this is an extremely difficult prospect.

“To answer our questions, we will need to find a way to get to know these animals and their environment – and this is under 900 meters of ice, 260 km from the ships where our laboratories are located. This means we will have to find innovative new ways to study them in order to answer all the questions that arise, ” Griffiths says.

Scientists also note that due to the climate crisis and the risk of collapse of ice shelves, there is less time to study and protect these ecosystems.

In this article:Antarctica, mysterious creatures