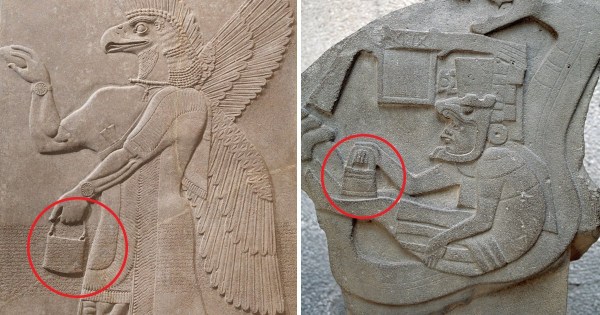 You may think that handbags are a modern obsession. But it’s been claimed that ancient sculptures from several different cultures show deities clutching the same sort of accessory.

It’s been claimed the unusual bits of luggage appears on sculptures made by Assyrians in modern-day Iraq as well as depictions of a god race called the Annukia made by the Sumerian civilisation living nearby.

The mysterious bags highlighted other commonalities between the gods depicted in other cultures.

Just as the ancient Sumerians depicted their deities in a humanoid form the Ancient Egyptians, and different cultures in the Americas did the same thing.

The obvious question here is why? Why did ancient cultures—separated thousands of kilometres from each other—depict their deities in a nearly identical way?

Furthermore, how is it even possible that the Ancient Sumerians depicted their gods carrying a mysterious bag, and that people halfway across the world did the same thing?

Earlier this year, it was suggested that the bags were either evidence of time travel or contained some piece of ‘forgotten technology’.

Now discussion about the bags has erupted again after a YouTube video from The Kepler Telescope Channel once again raised questions about their meaning and origin.

The YouTube channel had this rather wild suggestion: ‘Agriculture is known to have started near the Mount Ararat, this is also where the Ark of Noah was said to have came to rest and where the survivors of the great flood started a post Cataclysmic Civilization that would spread out in every direction from this point and place.

Could these bags represent seeds that were preserved onboard the ark in some sort of vault, maybe they were distributed across the World as we repopulated the Globe after the Great Flood?

Advertisement. Scroll to continue reading.
In this article:ancient sculptures