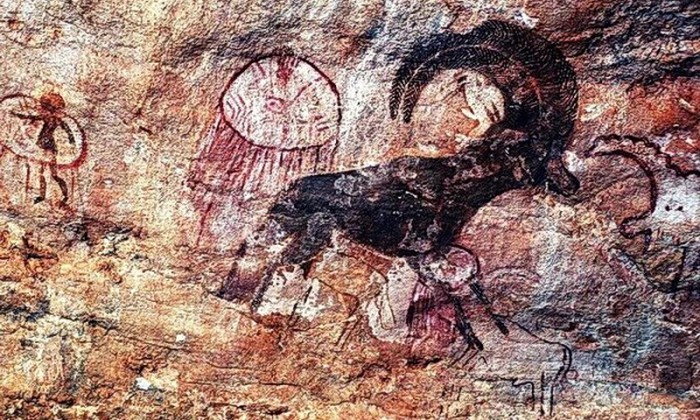 The Tassilin-Ager National Park has long attracted the attention of many archaeologists with its cave paintings, as it depicts many drawings that are of particular interest to researchers.

10 thousand years ago on this territory, lived people of which little is known. Now archaeologists managed to open the veil thanks to the found cave paintings. However, there are a number of images that cause researchers a number of questions.

Back in the mid-19th century, in the Sahara, scientists began to explore illustrations on stone. So, thanks to the cave paintings, the researchers were able to conclude that in prehistoric times the Sahara was not a desert.

In those days there were rivers, the animal world flourished, there was vegetation, and even heavy rainfall fell.

Also, archaeologists came to the conclusion that the civilization that once lived in the Sahara was on a par with the mighty peoples of Ancient China, India, Egypt. Then the desert began to advance, which evicted people from their homes. Despite the fact that people left, the cave paintings remained. So, the earliest drawings are at least seven thousand years old.

Most of all, historians were interested in images of people. Since most of them were depicted with a non-standard large head size, the work of artists of that era was nicknamed the “round-headed style”. The figures of people changed over time, but their heads remained round.

“The murals are placed so thoughtfully, and the figures are depicted in such strange poses that they make a strong impression. Seeing one of them in the first grotto, we were scared. The figure was about three meters high. She held an egg-shaped object in her raised hand,” researcher Henri Lot wrote.

Henri Lot, an archaeologist from France, was the first to discover incredible murals in the Sahara. He managed to find one of the largest prehistoric paintings, whose height was 6 meters. Henri Lot gave named it the “Great Martian God.” Specialists who study UFOs, looking at the picture, came to the conclusion that it depicts an astronaut in a spacesuit. However, according to scientists, the picture does not depict an astronaut, but a priest in clothing characteristic of the rituals.

Researchers also found drawings of humanoid and fantastic creatures. So, in one picture, the artist portrayed a man in a helmet that comes out of a disk-shaped object.

In addition, on the cave paintings you can find hybrids – an ostrich with the head of a lion, an antelope with the body of an elephant. Now researchers can only guess where the artists of that time were so imaginative.