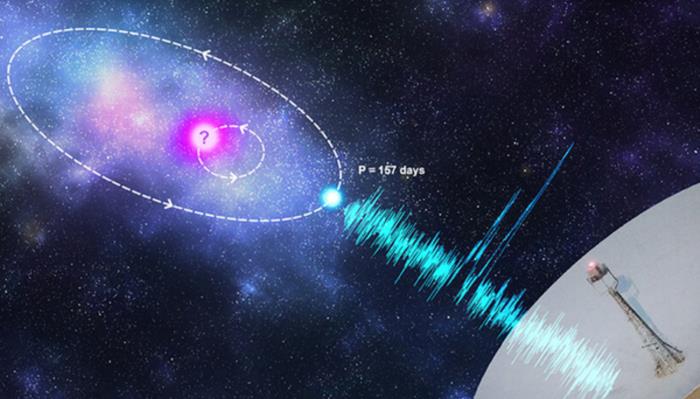 Astronomers have found a pattern in what seemed chaotic and unpredictable.

Astronomers of the Jodrell Bank Observatory in the UK discovered a fast radio burst (FRB) source that emits repetitive pulses with a certain regularity.

FRB 121102 is the most active of the fast radio bursts detected since its discovery in 2012. Previously, researchers believed that there was no pattern in the frequency of radio bursts, but now astronomers have found that this is not so. According to a new study, FRB 121102 shows repeated bursts over a period of about 90 days, and then lulls for about 67 days. Then this entire 157-day cycle is repeated again. If this analysis is correct, the source should have entered a new activity cycle on June 2.

The authors of the work indicate that this is a terrific discovery that can help rule out the possible causes of these mysterious signals. But at the same time, this is a very accurate demonstration of how strange and difficult to identify these signals are.

“This is an amazing result, because this is just the second system in which, as we believe, such modulation is seen during explosive activity. The detection of periodicity provides an important limitation on the origin of the bursts, ”- Kaustubh Rajwad, co-author of the study at the University of Manchester.

FRB is one of the most fascinating mysteries of space. These are extremely powerful radio signals from deep space, galaxies located at a distance of millions of light years from Earth. Some of them emit more energy than 500 million suns. But at the same time, they last a split second, and most of them do not repeat, which makes them very difficult to predict, track and, therefore, understand, although scientists have advanced in tracking such one-time bursts.

The picture partially changed after FRB 121102, originally discovered with the Arecibo radio telescope on November 2, 2012, was re-spotted in 2016. Earlier this year, scientists discovered a certain cyclical pattern at a source called FRB 180916. For four days, it could flare up once or twice an hour, and then subside for 12 days. In total, his cycle was 392 hours.

Researchers note that if these two sources are similar, and their frequency is associated with orbital motion, then this range can be compared with known objects, which will narrow the search for the cause of FRB.

“This exciting discovery highlights how little we know about the origin of FRB. Further observations of a large number of FRBs will be necessary in order to get a clearer picture of these periodic sources and find out their origin, ”said Duncan Lorimer, co-author of the study from the University of West Virginia.

Advertisement. Scroll to continue reading.
In this article:FRB 121102, mysterious signals