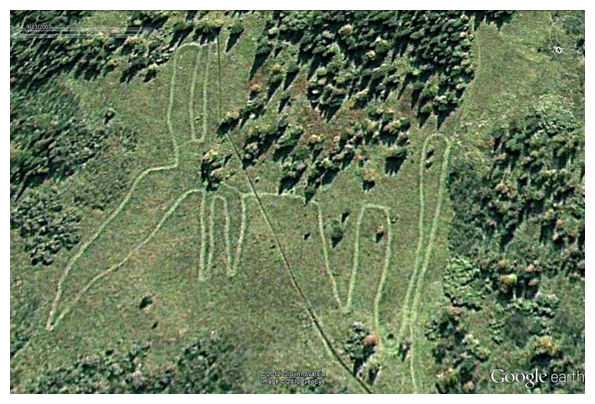 A huge geoglyph in the shape of an elk or deer discovered in Russia may predate Peru’s famous Nazca Lines by thousands of years.
The animal-shaped stone structure, located near Lake Zjuratkul in the Ural Mountains, north of Kazakhstan, has an elongated muzzle, four legs and two antlers. A historical Google Earth satellite image from 2007 shows what may be a tail, but this is less clear in more recent imagery.
Excluding the possible tail, the animal stretches for about 900 feet (275 meters) at its farthest points (northwest to southeast), the researchers estimate, equivalent to two American football fields. The figure faces north and would have been visible from a nearby ridge.
“The figure would initially have looked white and slightly shiny against the green grass background,” write Stanislav Grigoriev, of the Russian Academy of Sciences Institute of History & Archaeology, and Nikolai Menshenin, of the State Centre for Monument Protection, in an article first detailing the discovery published last spring in the journal Antiquity. They note that it is now covered by a layer of soil.
Fieldwork carried out this past summer has shed more light on the glyph’s composition and date, suggesting it may be the product of a “megalithic culture,” researchers say. They note that hundreds of megalithic sites have been discovered in the Urals, with the most elaborate structures located on a freshwater island about 35 miles (60 km) northeast of the geoglyph.