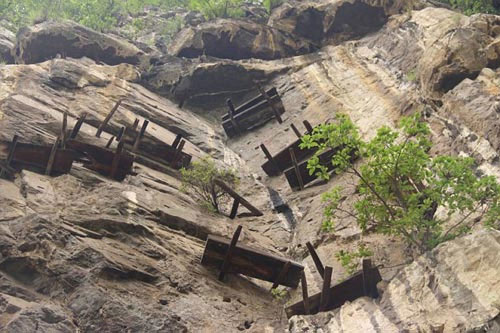 On the mountain cliffs in Gongxian in Sichuan province, China, lies a peculiar sight –hundreds of ancient wooden coffins hanging precariously from the cliff face. Some believe they were hung on cliffs to be within reach of the gods, while others theorise that it was to keep animals away from their dead. For the past two months the ancient hanging coffins have been undergoing restoration to stabilise and protect these remarkable artefacts from further damage.

The hanging coffins of Sichuan were left behind by the Bo people, who are thought to have died out about 400 years ago, taking with them the secrets of their burial tradition. The Bo were an ethnic minority people living astride the borders of modern day Sichuan and Yunnan provinces. There they created a brilliant culture as early as 3,000 years ago. The Bo differed from other ethnic groups in their burial customs. Typically hewn from durable hardwood logs, their hanging coffins went unpainted.

Some of the tombs are as old as 3,000 years and the most recent one dates back to about 1500 AD. Each coffin is made from a hollowed out single tree trunk and was originally protected by a bronze cover.

According to Cui Chen, curator of the Yibin Museum, hanging coffins come in three types. Some are cantilevered out on wooden stakes. Some are placed in caves while others sit on projections in the rock. All the three forms can be found in Gongxian where most of China’s hanging coffins are located.

But these bizarre hanging coffins have baffled experts for centuries in southern China, and indeed around the world. Some believe the coffins must have been lowered down with ropes from the top of the mountain. Some think the coffins had been put in place using wooden stakes inserted into the cliff face to be used as artificial climbing aids. Others believe that scaling ladders or timber scaffolds were used. However, investigators have failed to find even a single stake hole. 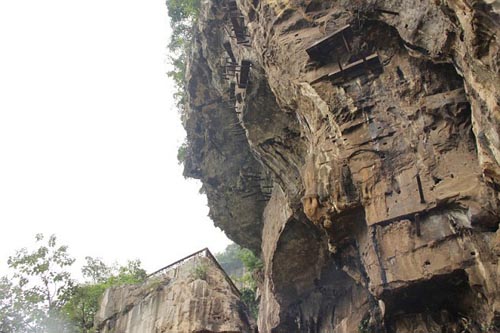 Read the full article at: ancient-origins.net

Advertisement. Scroll to continue reading.
In this article:China, hanging coffins