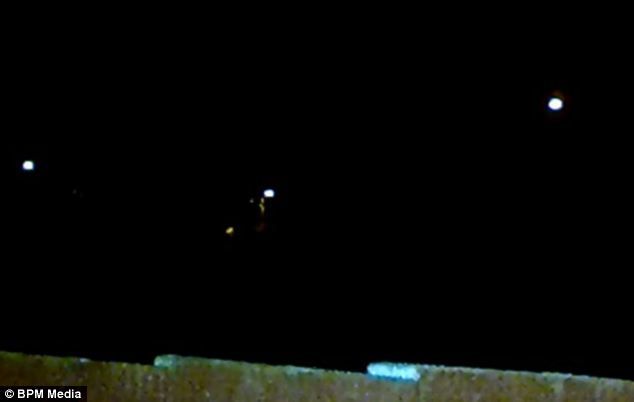 * She spent nearly an hour filming the phenomenon near Birmingham

A mother has told of her shock after she spotted mysterious lights in the sky above her home.

The video she made shows a formation of three or four lights, rising and falling together in the night sky.

The mother-of-three says she filmed the phenomenon for at least 40 minutes – only breaking off for to put on her slippers when her feet got cold.

She said: ‘I was painting upstairs then went to the back door for a cig. I looked up and there were these shapes, like red orbs, in the sky. ‘They didn’t look like stars or planes or helicopters, they were just hanging there. I thought I’d had a few too many rum and cokes.

‘I got my phone and zoomed in on them. I was there for about 20 minutes, my feet were freezing but I couldn’t come away.

‘Eventually I had to come back inside for my slippers and fags, then I went back out and filmed another 20 minutes.

‘I must have looked mad out there for so long just filming the sky but it was so strange I did not want to go inside.’

After spending nearly an hour in the garden she finally ended her video and went back inside to her family.

She added: ‘I want people to see it because I want to know what it was. We put it on the big TV screen and you can see all kinds of things happening, lights shooting off, appearing and disappearing. ‘People must think I’m mad but I know what I saw. I am not saying it is aliens, but they are definitely UFOs and I don’t know what they were.’

Ms Bardsley’s sighting earlier this year is just the latest in a series of apparent close encounters in the area.

In 2012 an unnamed police officer claimed he witnessed a UFO speeding across the sky near Birmingham airport while off-duty.

And in 2010, two fighter jets were filmed whizzing over the M5 in the West Midlands, apparently in pursuit of a UFO.