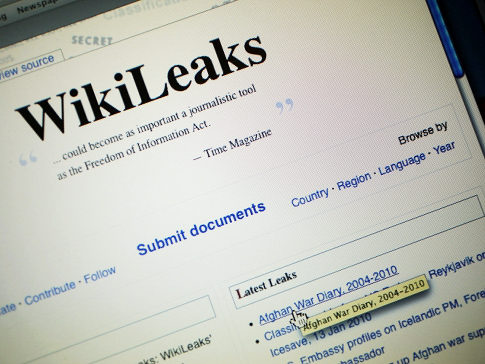 Julian Assange has grabbed the attention of the entire planet, as both mainstream and alternative media networks have covered Wikileaks in depth. For those who don’t know, Wikileaks is an international, online, non-profit organization that publishes secret (classified) documents,  information, news leaks and other classified material from anonymous sources. They are no different from Bradley Manning and Edward Snowden. As I’ve mentioned before, they’ve been a tremendous threat to the controlling elite for a number of years and have gained the attention of major mainstream media outlets worldwide, many of whom have bashed Assange, pointing to the idea that the release of classified documents is a threat to national security. Wrong, it’s simply a threat to secrecy, information and truth. America alone classifies over five hundred million pages of documents per year. Think about a historian trying to study history, or technological development, science and more, how can they properly do this if most of this information is constantly kept secret from the general population?

That’s why organizations like Wikileaks are so important, as they shed light on truth that most of the human race knows nothing about, and one of them is the reality of UFOs and extraterrestrials.

Wikileaks is a major attention grabber, so it’s a great way to bring more attention to the UFO/extraterrestrial phenomenon that’s been gaining heavy interest over the last few years.

As far as UFO documents go, the Wikileaks ones are not really significant compared to what’s already available in the public domain. They do however show that these topics are still mentioned in highly classified documents. Again, we already have a number of (more significant and telling) documents that have been released into the public domain, as well as statements from high ranking military and political figures. To see some of these documents and whistle-blowers, you can refer to the last article I wrote on this subject by clicking HERE.  For more articles on this subject from Collective Evolution, you can click HERE.

Prominent Lithuanian politician says that there are a “group of UFOs, who are making influence from the Cosmos.” That “there exists a decreasing group of persons, who are trying to rationally analyze the situation and objectively evaluate what is happening.” (source)

This cable comes from the year 2006 from the American Embassy in Vilnius, Lithuania. The statement was made by Albinas Januska, who at the time was appointed adviser to the Lithuanian Prime Minister.

This is a cable from Japan that shows how the Chief Cabinet Secretary was unhappy with the governments official view rejecting the existence of UFOs. The document goes on to describe how he stated in a press conference that “I am sure that unidentified flying objects exist, otherwise it is impossible to explain the Nazca Lines (In Peru), isn’t it?” (source)

He also stated that ” the government has offered only a boilerplate response in its formal statement” regarding UFOs.

Tajik Mayor says there is life on other planets, and that peace and unity on Earth is necessary.

On January 13 Ambassador called on Dushanbe Mayor and Chairman of the upper house of Parliament Mahmadsaid Ubaidulloev at his parliamentary office. The Mayor began the meeting with a lengthy discourse on Afghanistan, thanking the United States for its contributions and sacrifices there, and saying that U.S. activities there were very important “as we enter the third millennium and the 21st century.” Ubaidulloev thought the main task there was to build a sense of national identity among ethnically disparate groups, and said the United States was an example for this. He noted that “war is very dangerous”, and said “we know there is life on other planets, but we must make peace here first.

In a platitude-ridden meeting, Dushanbe Mayor Mahmadsaid Ubaidulloev said upcoming elections would be free and fair, that contributions to the Roghun Dam were voluntary, and that the losses suffered by the United States in Afghanistan were felt by Tajiks as their own. Ubaidulloev asked for help in getting Tajik students admitted to Harvard University, but effectively declined to help find a new location for an American Corner in Dushanbe. He asserted the existence of life on other planets, caveating this by noting that we should focus on solving our problems on Earth. End Summary. (source)

Julian Assange has also said that that a UFO cult called the Raelians were of concern to the U.S. ambassador in Canada. It’s not surprising that the U.S. ambassador in Canada was concerned with this group. Government agencies have been concerned, harassing, monitoring and questioning extraterrestrial abductees and contacts for a number of years. They have been studying this subject for a very long time.

Like I said, Wikileaks seems to garnish a lot of attention, that’s why I chose to cover the topic, even though the documents are not as significant as ones that have already been released from dozens of governments, three letter agencies and more. Not to mention shocking statements from high ranking military and political personnel.  I linked an article in the first few paragraphs of this one that provides more examples of these, and below I am going to provide a brief excerpt from it to illustrate what I am talking about.

VERY BRIEF example of other information that’s already out there

Within the past few years, dozens of governments admitted to allocating resources and having programs to study the UFO phenomenon. For instance, in Canada the RCMP, Transport Canada and the Department of National Defence recently admitted to tracking UFOs and investigating them. (source) They’ve been doing it for years, accumulating thousands upon thousands of UFO related documents -many of which have since been officially released.

HERE is the latest batch of UFO files released from the United Kingdom.

Documents released by the National Security Agency (NSA) reveal what is recorded when a UFO is being tracked on radar. HERE is one example. HERE is a four page U.S. Defense Intelligence Agency and NSA report describing a particular encounter in great detail.

“As the F-4 approached a range of 25 nautical miles it lost all instrumentation and communications. When the F-4 turned away from the object and apparently was no longer a threat to it, the aircraft regained all instrumentation and communications. Another brightly lighted object came out of the original object. The second object headed straight toward the F4. ”

You can read more about the radar tracking of UFOs HERE.

HERE is a Wikileak cable that describes how some politicians already know we are not alone in the universe. You can read more about that HERE.

Again the list goes on and on and thousands upon thousands of UFO related documents are now available in the public domain. For a summary of more documents that have been declassified and made available, a video done by UFO expert Richard Dolan does a great job at doing just that in 10 minutes.

Forgive me for using much of the same information in multiple UFO articles. We always have new readers coming to our site and this is always new information for some.

“Decades ago, visitors from other planets warned us about the direction we were heading and offered to help. Instead, some of us interpreted their visits as a threat, and decided to shoot first and ask questions after. Trillions of dollars have been spent on black projects which both congress and the commander in chief have deliberately been kept in the dark.” (source) – Former Canadian Defense Minister Paul Hellyer

“In one of the cases during the cold war, 1961, there were about 50 UFOs in formation flying South from Russia across Europe. The supreme allied commander was very concerned and was about ready to press the panic button when they turned around and went back over the North Pole. They decided to do an investigation and they investigated for three years and they decided with absolute certainty that four different species, at least, have been visiting this planet for thousands of years. There’s been a lot more activity in the past two decades, especially since we invented the atomic bomb.” (source) – Paul Hellyer

“Behind the scenes, high ranking Air Force officers are soberly concerned about UFOs. But through official secrecy and ridicule, many citizens are led to believe the unknown flying objects are nonsense” Former head of CIA, Roscoe Hillenkoetter, 1960 (source)

“There is a serious possibility that we are being visited and have been visited for many years by people from outer space, by other civilizations. Who they are, where they are from, and what they want should be the subject of rigorous scientific investigation and not be the subject of ‘rubishing’ by tabloid newspapers.” (source) – Lord Admiral Hill-Norton, Former Chief of Defence Staff, 5 Star Admiral of the Royal Navy, Chairman of the NATO Military Committee

“This thing has gotten so highly-classified…it is just impossible to get anything on it. I have no idea who controls the flow of need-to-know because, frankly, I was told in such an emphatic way that it was none of my business that I’ve never tried to make it to be my business since. I have been interested in this subject for a long time and I do know that whatever the Air Force has on the subject is going to remain highly classified” – Senator Barry Goldwater, Chairman of the Senate intelligence committee (source)

“There is abundant evidence that we are being contacted, that civilizations have been monitoring us for a very long time. That their appearance is bizarre from any type of traditional materialistic western point of view. That these visitors use the technologies of consciousness, they use toroids, they use co-rotating magnetic disks for their propulsion systems, that seems to be a common denominator of the UFO phenomenon” (source) – Dr. Brian O’leary, Former NASA Astronaut and Princeton Physics Professor

Former Sen. Mike Gravel (D-Alaska), and 2008 presidential candidate said that there is “an extraterrestrial influence that is investigating our planet. Something is monitoring the planet and they are monitoring it very cautiously.” You can learn more about the citizens hearing here.

I cannot begin to express how much information and evidence is out there to support the extraterrestrial hypothesis.

All sources are highlighted throughout the article.

Advertisement. Scroll to continue reading.
In this article:UFO, WikiLeaks