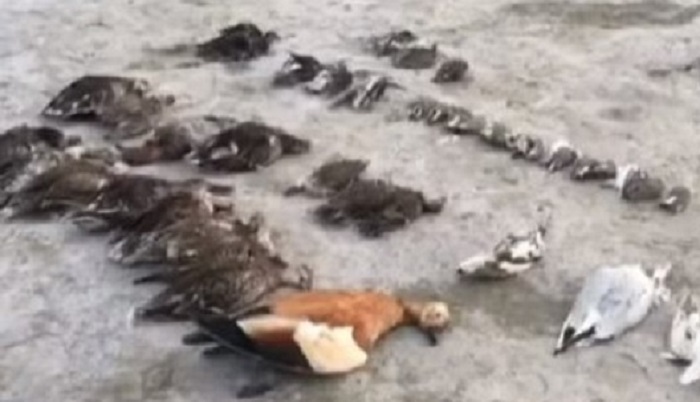 Wildlife experts are trying to understand the cause of the massive deaths of birds on the shores of Sambar Lake – India’s largest salt lake.

Sambar Lake is located 80 km southwest of Jaipur (Jaipur). It covers an area of ​​190 to 230 square kilometers, depending on the season.Many migratory birds, marsh birds, gather at the lake shores at certain times of the year (Wader), flamingos, storks, ducks and dozens of different species. But, about two weeks ago, locals often began to see carcasses of birds.

To date, more than 2,000 dead birds have been found on the coastal stretch, about 12 km wide, and more than 5,000 on unofficial ones. According to locals, the former lively shores of the lake have now become a bird cemetery, among which there are rare species.

According to one resident, there are so many bird carcasses in some places that they look like a large pile of manure from afar!

The cause of the death of the birds has not yet been clarified. They were not killed with a firearm or other weapon. No wounds or signs of disease were found on their bodies. Large piles of dead birds in one place indicate that they died suddenly, exactly at the same place they were in groups overnight.

“We have never seen anything like this here. About 5,000 birds have died here from a mysterious death …! “

Environmentalists and animal rights activists have voiced several versions of the mass deaths of birds – from a severe hailstorm to pesticides used in nearby agricultural fields. There is also a version for mass infection.

But for the locals, all of these versions seem like a pitiful attempt to put what’s going wrong. For them, such bird death is a mysterious and abnormal phenomenon.

“I have not seen anything like this in my 40 years of service in the forestry department. At first, I also thought it might be due to hail, but here every year there are strong hail storms. I also don’t believe in the pesticide version. No trace of them was found in the water samples. “

Some of the dead bird carcasses were sent for analysis to a laboratory in Bopal.

The locals gather the rest of the carcasses in piles, then bury them in deep holes near the beach.

Expect to be informed if further information is available on what is happening.

Advertisement. Scroll to continue reading.
In this article:birds dying, India