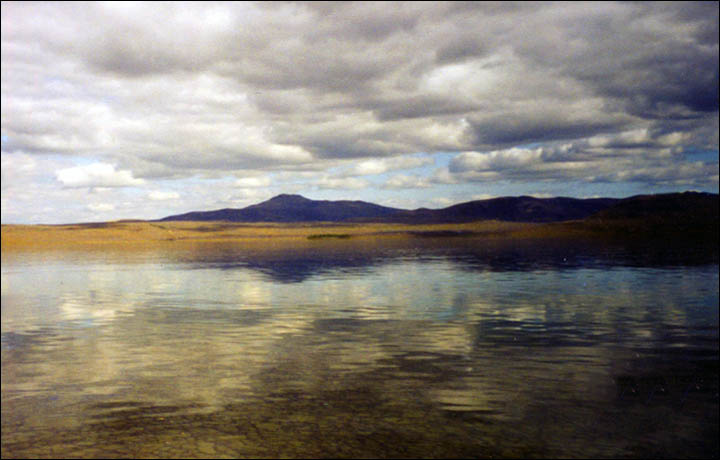 Unknown remains of a large creature have been found in Lake Labynkyr, say the first divers to ever reach its floor.

A dozen divers braved legends of monsters and the coldest winter temperatures in a venture that is likely to go into the Guinness World Book of Records.

Using an underwater scanner they discovered a jaw and skeletal remains that might be the notorious ‘Devil’ that was first reported by locals in the 19th century, it was claimed on 1 February.

Reports of a monster in Lake Labynkyr pre-date claims about the Loch Ness monster in Scotland, say Russian academics.

The lake in the Sakha Republic – or Yakutia – is seen as one of the most mysterious in the world because even in temperatures of minus 60C its waters do not completely freeze. Scientists struggle to explain this phenomenon.

The lake averages 52 metres in depth but has a mysterious underwater fissure which reaches down to 80 metres.

For the historic dive – the first time the floor of the lake has been conquered – the air temperature was minus 42C and the water 2C.

Earlier reports said that top Russian diver Dmitry Shiller,  leader of the Russian Georgraphical Society Underwater Research Team, and his colleagues had reached the bottom and returned without any sign of the legendary monster.

‘Dmitry Shiller did not meet the monster – but managed to film the bottom of the lake and took samples of the lake’s flora,’ said a spokesman.

But later it was claimed the team had found evidence of jaws and a skeleton using an underwater scanner, thought there was initially scant detail.

Still, the reports which echoed an account  by a scientist in Soviet times who visited the lake. Geologist Viktor Tverdokhlebov wrote of the ‘Devil’: ‘There have been all sort of hypothesises about what kind of creature it could be: a giant pike, a relic reptile or an amphibia. We didn’t manage to prove or to disprove these versions….. we managed to find remains of jaws and skeleton of some animal.’

The February dive is believed to be the first ever aqualung winter dive into a natural lake in this part of Siberia, which is known as the Pole of Cold.

The lake lies in the same district as Oymyakon, site of the world’s coldest ever reading in an inhabited town.

The divers are expected to seek an entry in the Guinness World Book of Records as being the first in winter in a lake in such a cold region.

The dive was made at the request of Yakutia State University in order to film the bottom of the lake and gather samples of water, flora and fauna.

It is the first-ever dive to the bottom of the lake, which is at an altitude of 1,020 metres above sea level.

The expedition was supported by Russian Emergencies Ministry rescuers and also involved cameramen of the Sakha National Broadcasting Company. Reports of a monster – known as the ‘Devil’ – and underwater links to other lakes have long intrigued scientists and the rare visitors to Lake Labynkyr.

For details on the theories about monsters in this lake – which pre-date reports of the famous ‘Nessie’ in Scotland – please read our earlier report here.