In recent weeks, a similar structure has appeared not only in Utah in the United States, but also in Romania.

The monolith is similar to the one that was previously discovered in Utah, but then disappeared. Now a metal pillar about three meters high is located on the top of Pine Mountain near the city of Atascadero. His appearance was reported by tourists heading for the mountain.

in recent weeks a similar structure has appeared not only in Utah in the United States, but also in Romania. In both cases, the unknown structures disappeared after a few days.

The main difference between the new monolith and its predecessors is that it is not secured and, as the newspaper notes, it can be knocked to the ground with a strong blow.

The newspaper suggests that the appearance of identical monoliths in different US states and beyond may be part of some kind of advertising campaign, but so far none of the business representatives have announced their involvement in this action.

Representatives of the Utah Public Safety Department, where this structure was previously discovered, also did not specify how and why it could appear. One of the Instagram users, Colorado photographer Ross Bernards, claims to have witnessed how at the end of November a group of people dismantled the monolith and took it away on a special platform.

On his Instagram page, Ross described how he visited the desert in Utah to capture the object in the moonlight. About two hours later, a group of people arrived at the scene, “quickly broke” and took away the parts of the monolith by car. A spokesman for the Bureau of Land Management said that the agency will not investigate the “theft” and will try to find the violators of the law who installed the structure, The Insider writes.

A video of the dismantling of the mysterious monolith in the desert of Utah, USA, was published on the YouTube channel of the popular extreme sportsman Andy Lewis on December 1. The footage shows a group of four people removing parts of the structure, while the faces of the protesters are blurred.

In an interview with the Grit Daily News, Andy and his colleague, local guide Sylvan Christensen confirmed that they removed the monolith due to the large number of tourists who wanted to see the structure in person. According to the stuntman, people spoiled the landscape by trying to get through the desert in ground vehicles and airplanes.

We want to make it clear that we support art and artists, but legality and ethics set the standards, especially here in the desert. This land was not physically prepared for population displacement (especially during the pandemic). People came by cars, buses, vans, helicopters, planes, trains, motorcycles and e-bicycles, and there is not even a parking lot here, ”Andy and Sylvanas commented.

Initially, the mysterious monolith was discovered by American biologists who flew over the Utah desert to count the bighorn sheep. Scientists have suggested that the pillar is the work of a contemporary artist who considers himself a fan of Stanley Kubrick’s “A Space Odyssey.”

In this article:California, metal monolith 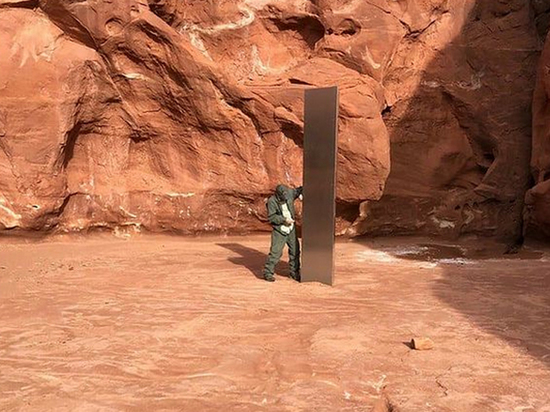 A mysterious metal monolith found in the Utah desert canyon

A mysterious metal monolith was discovered from a helicopter in a remote part of the US state of Utah. It has not yet been possible...