Carbon dating suggests it is around 2,500 years old

Archaeologists baffled at how brain has survived

Archaeologists believe they have discovered one of the world’s oldest brains that once belonged to a man in Iron Age Britain who was sacrificed in a ritual killing.

Scientists found the cranium in a muddy pit when they were excavating a site before a new campus was to be built at the University of York. When a researcher reached inside the skull, she was stunned to discover the soft tissue of the 2,500-year-old brain still preserved.

Fractures and marks on the bones suggest the man, who was aged between 26 and 45, died most probably from hanging, after which he was carefully decapitated and his head was then buried on its own. 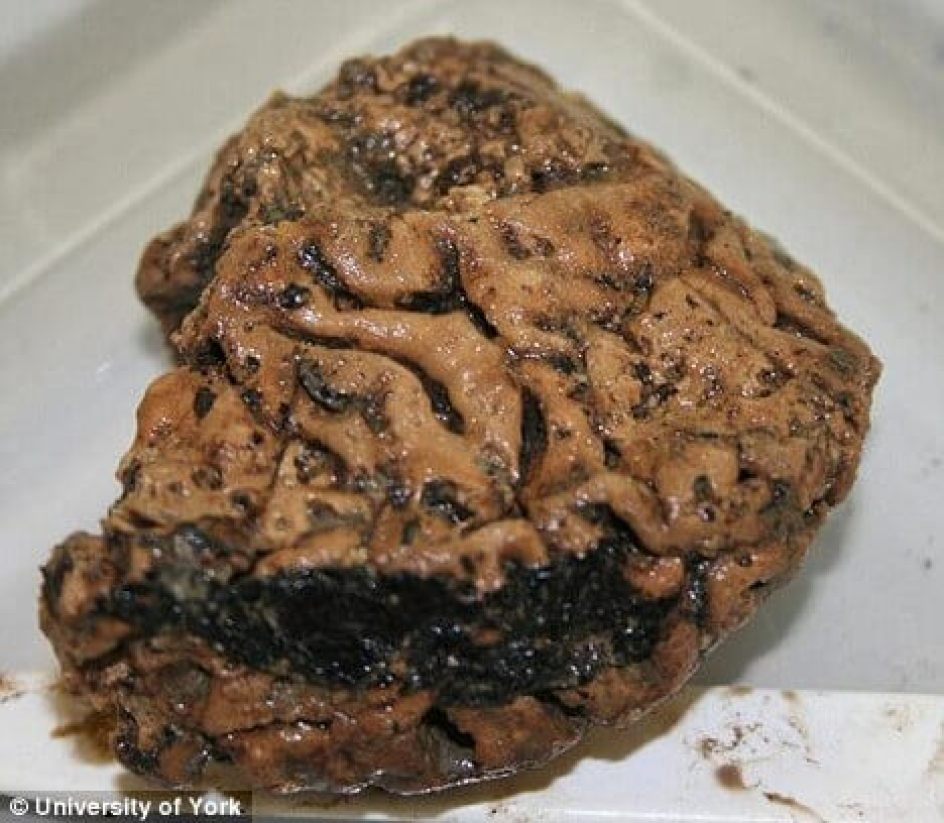 Grey matter: The 2,500-year-old preserved brain has baffled scientists after it was found during an excavation at the University of York

Scientists have been baffled by how the brain tissue – which usually rots after a couple at years – managed to remain intact for so long.

‘The survival of brain remains where no other soft tissues are preserved is extremely rare,’ said Sonia O’Connor, research fellow in archaeological sciences at the University of Bradford.

‘This brain is particularly exciting because it is very well preserved, even though it is the oldest recorded find of this type in the UK, and one of the earliest worldwide.’

Philip Duffey, a neurologist at York Hospital who scanned the skull, said: ‘I’m amazed and excited that scanning has shown structures which appear to be unequivocally of brain origin.’ 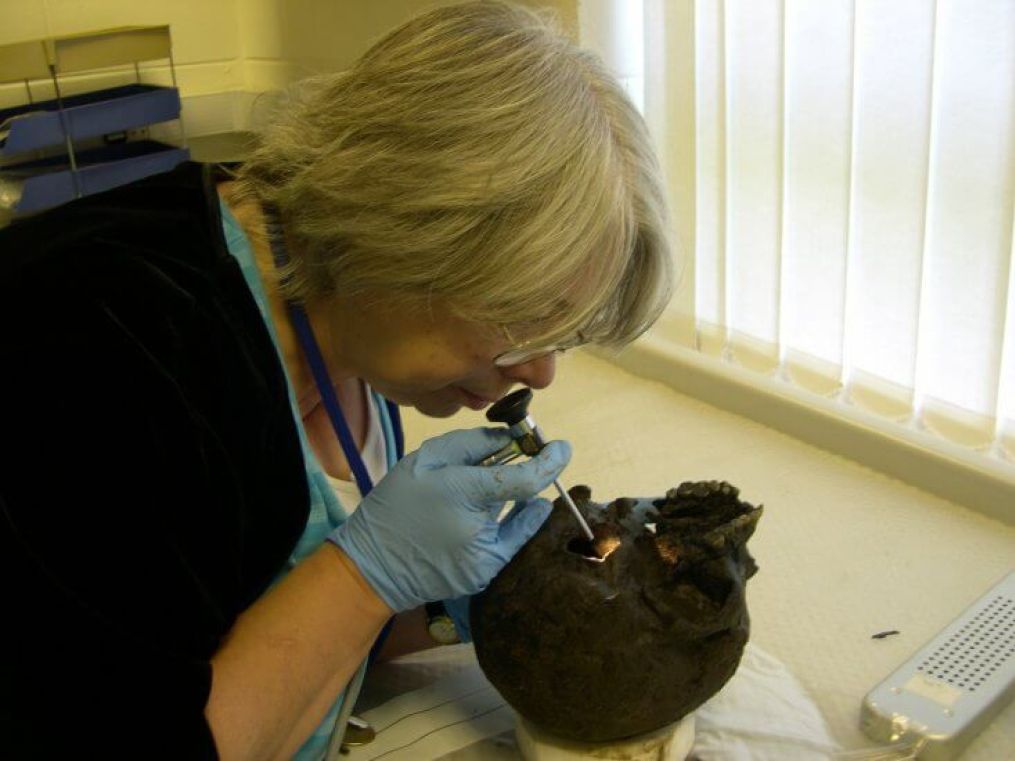 Baffled: Dr Sonia O Connor, from the University of Bradford, examines the remains of the brain

‘I think that it will be very important to establish how these structures have survived, whether there are traces of biological material within them and, if not, what is their composition.’

Experts from York Archaeological Trust were commissioned by the university to carry out the exploratory dig last year before building work on the £750million campus expansion started.

The university put together a team of scientists, archaeologists, chemists, bio-archaeologists and neurologists, to establish how the man’s brain, could have survived when all the other soft tissue had decayed leaving only the bone. 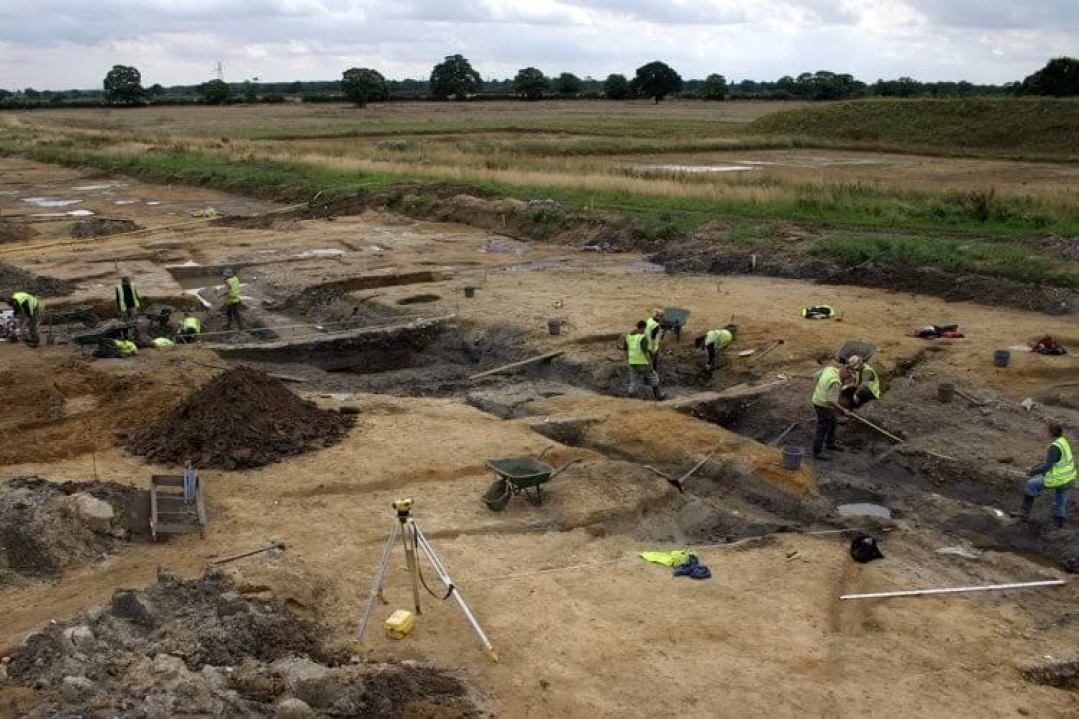 Remains: Archaeologists sift through the muddy pit at the site near the University of York where the brain was found

The team is also investigating details of the man’s death and burial that may have contributed to the survival of what is normally highly vulnerable soft tissue.

The research, which was funded by the University of York and English Heritage, is published in the Journal of Archaeological Science.

Since the discovery, the brain and skull have been kept in strictly controlled conditions, but scientists have examined samples using a range of sophisticated equipment, including a CT scanner at York Hospital and mass spectrometers at the University of York.

Samples of brain material had a DNA sequence that matched sequences found only in a few individuals from Tuscany and the Near East. Carbon dating suggests the remains date from between 673-482BC.

Fractures on the second neck vertebrae point to some kind of trauma before the man died and and a cluster of about nine horizontal fine cut-marks made by a thin-bladed instrument, such as a knife, can be seen on the front of the brain. 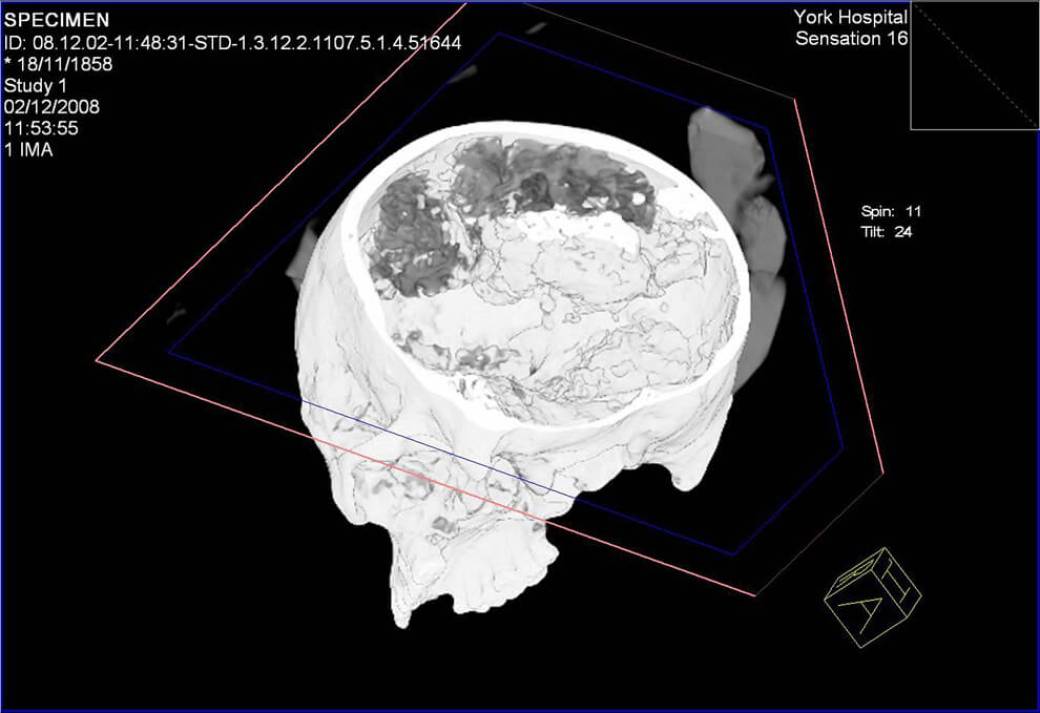 Preserved: Brain material shows as dark folded matter at the top of the head in this computer-generated view of the skull 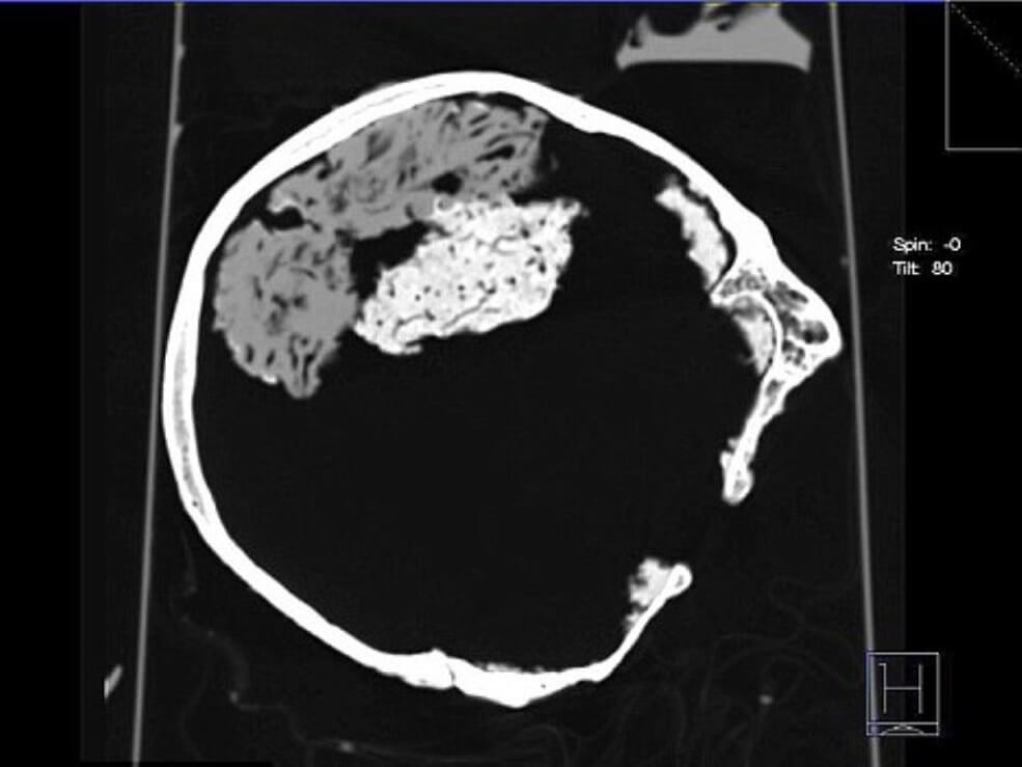 Clean: Scientists said there was no trace on the brain of the usual preservation methods such as embalming or smoking

Scientists are now investigating how lipids and proteins found in the brain preserved the brain and what happened between the man dying and his burial.

Dr O’Connor said: ‘It is rare to be able to suggest the cause of death for skeletonised human remains of archaeological origin. The preservation of the brain in otherwise skeletonised remains is even more astonishing but not unique.

‘This is the most thorough investigation ever undertaken of a brain found in a buried skeleton and has allowed us to begin to really understand why a brain can survive thousands of years after all the other soft tissues have decayed.’

Despite the place that ‘trophy heads’ appear to have played in Iron Age societies and evidence for the preservation of human remains in the Bronze Age, the researchers say there is no evidence for that in this case. They found no marks indicating deliberate preservation by embalming or smoking.

Dr O’Connor added: ‘The hydrated state of the brain and the lack of evidence for putrefaction suggests that burial, in the fine-grained, anoxic sediments of the pit, occurred very rapidly after death. This is a distinctive and unusual sequence of events, and could be taken as an explanation for the exceptional brain preservation.’