Anyone still doubting that this is on the rise?!

via Time of India:

Madhubani/Patna: Farmers working in a paddy field at a village in Madhubani district were left shaken when a meteorite-like object weighing around 15kg fell from the sky, leaving a crater at the spot where it crashed.

Madhubani DM Shirsat Kapil Ashok told TOI that the incident took place around 2.30pm on Monday. “Agriculture labourers working the paddy field where the meteorite struck claimed that they saw a fireball-like object coming down from the sky and made a deep crater where it hit the ground. The farmers also saw smoke coming out from the spot in the water-filled agriculture field,” Shirsat said.

Displaying the ‘meteorite’ wrapped in a red cloth on Tuesday morning, the Madhubani DM said the stone-like object has magnetic properties. He added that the mysterious object was kept secure in the treasury office at the Madhubani collectorate.

“The science and technology department will take a decision regarding further action. The object might be sent to space research organisations like ISRO or any museum,” Shirsat said. 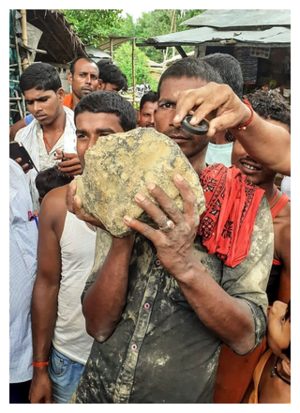 Geoscientists are not surprised at the fall of a meteorite in Madhubani district as it is said to be a common phenomenon. But the weight and size of the meteorite is noteworthy, they said.

N Dayal, a retired director of Geological Survey of India, pointed out that a meteorite weighing about five kg had fallen at Sherghati in Gaya district on August 25, 1865.

The said meteorite was a Martian rock which had solidified from a volcanic magma more than four billion years ago. Two pieces of meteorites weighing 600 gm and 200 gm respectively fell at Parsa in Muzaffarpur on April 14, 1942. However, a number of meteorites of bigger size have reportedly fallen in other states, including Jharkhand in the past and most of them have been studied in detail, Dayal said.

Patna University geology department head Ramesh Shukla said every year the earth is hit by nearly 6,100 meteors large enough to reach the ground, but the vast majority fall unnoticed in uninhabited areas. In the present case, however, the meteor has fallen in an inhabited area. Geoscientists would make a detailed study of this meteorite soon, he added.

Amitabh, project coordinator at Shri Krishna Science Centre, Patna told TOI on Tuesday that there was only a 6 to 7% chance of a meteor reaching the surface of the earth, while in 90% cases, only ashes were recovered.

“When a meteor enters the earth’s orbit, it turns into ball of fire due to friction, and it burns until there is nothing left. It is likely that the meteor which was found in Madhubani was huge maybe around 600 kg that got reduced to around 10kg.” Talking about its significance, Amitabh said, “It is presumed that meteors were formed at the birth of the universe. Through micro-analysis of meteors, scientists can get some information regarding solar system and universe. When the meteors (if iron made) came in contact with earth orbit, it also channels the magnetic power of the earth.”

Advertisement. Scroll to continue reading.
In this article:India, Meteorites