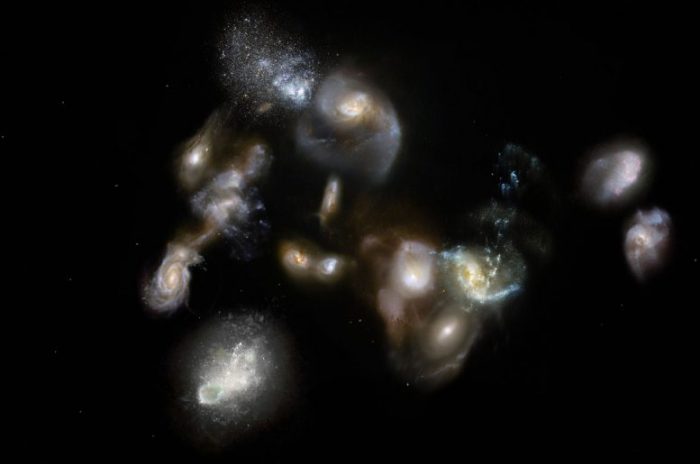 Peering billions of light-years back to when the Universe was just 10 percent of its current age, astronomers have spotted a colossal pile-up: 14 young, starbursting galaxies merging into one of the most massive structures in the Universe.

Using some of the most powerful telescopes in operation today, an international research team discovered the extremely dense concentration of hot galaxies careening towards each other.

Eventually the megamerger will form a cluster of galaxies, gravitationally bound by dark matter and ultimately smooshing together into one ginormous galaxy

This stage of the merger is called a protocluster, and it’s an extraordinary find.

“Having caught a massive galaxy cluster in throes of formation is spectacular in and of itself,” said Scott Chapman, an astrophysicist at Dalhousie University, one of the authors on a new paper published in Nature.

“But the fact that this is happening so early in the history of the Universe poses a formidable challenge to our present-day understanding of the way structures form in the universe.” 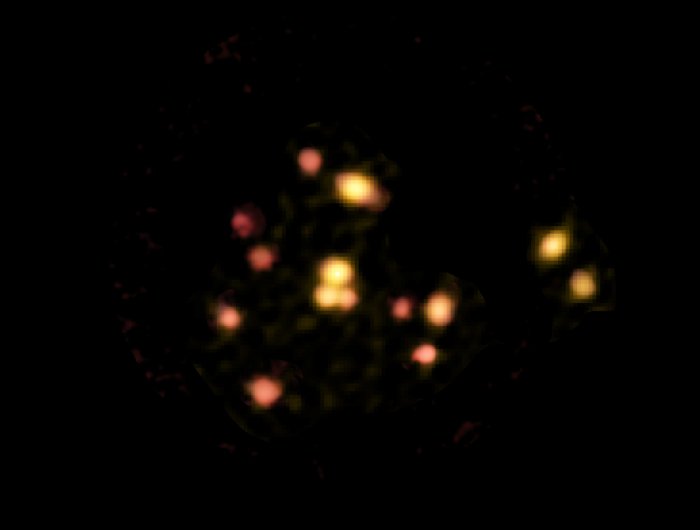 The protocluster, named SPT2349-56, is 12.4 billion light-years away, populated by dusty galaxies that are forming stars at a furious rate – up to 1,000 times faster than the Milky Way. Yet they’re crammed into a space just three times bigger than our whole galaxy.

In itself, the protocluster would be a rare find, but there’s another twist to the story. It’s one of two such recent discoveries.

Publishing in arXiv last September, and their findings accepted into The Astrophysical Journal, a team of researchers announced they’d found a protocluster of 10 dusty starburst galaxies in the early Universe too. They nicknamed it the Dusty Red Core.

You can fully expect to discover all kinds of things forming in the early Universe – stars, galaxies, clusters of galaxies – but the size and composition of these protoclusters is a conundrum.

“The lifetime of dusty starbursts is thought to be relatively short, because they consume their gas at an extraordinary rate,” explained astrophysicist Iván Oteo from the University of Edinburgh, lead author on the arXiv paper.

“At any time, in any corner of the Universe, these galaxies are usually in the minority. So, finding numerous dusty starbursts shining at the same time like this is very puzzling, and something that we still need to understand.”

After the Big Bang, according to our current models of the Universe, everything was still dark for a while. It wasn’t until around 1 billion years later that the Universe became fully ionised and transparent, and we see the first galaxies start appearing.

These clusters appear about 1.4 billion years after the Big Bang. The models of the Universe’s evolution predict that, while these clusters can exist, they ought to have taken much longer than that to evolve.

“How this assembly of galaxies got so big so fast is a mystery,” said Tim Miller, a PhD candidate at Yale University, and lead author on the Nature paper.

“It wasn’t built up gradually over billions of years, as astronomers might expect. This discovery provides a great opportunity to study how massive galaxies came together to build enormous galaxy clusters.”

SPT2349-56 was first seen as a faint smudge of light imaged by the South Pole Telescope in 2010, but it was unusual enough to warrant further investigation with something more powerful.

Often objects that early in the Universe are too faint for our telescopes to pick up, but there may be more of these protoclusters out there, the researchers said.

“These discoveries by ALMA are only the tip of the iceberg. Additional observations with the APEX telescope show that the real number of star-forming galaxies is likely even three times higher,” said ESO astronomer Carlos De Breuck.

The SPT2349-56 paper has been published in the journal Nature, and the Dusty Red Core paper can be read on the preprint resource arXiv.

Advertisement. Scroll to continue reading.
In this article:assembly of galaxies, galaxy cluster