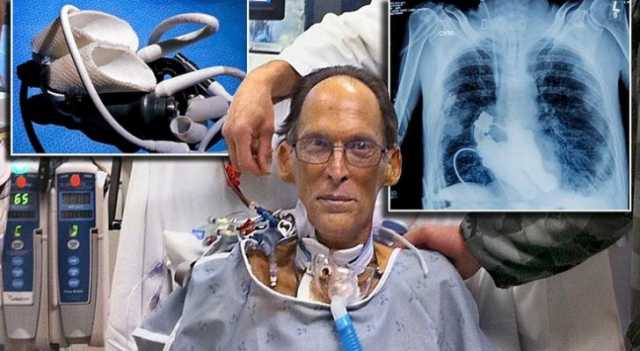 In March of 2011, a gentlemen by the name of Craig Lewis, a 55-year-old suffering from a life threatening heart problem was admitted to the Texas Heart Institute with a condition called “amyloidosis.” It’s a rare autoimmune disease that fills internal organs with a viscous protein that causes rapid heart, kidney and liver failure. Without immediate intervention Lewis would have likely died within days.

Fortunately, Dr. Billy Cohn and Dr. Bud Frazier from the Institute came up with what they call a “continuous flow” device which would allow blood to circulate throughout his body without a pulse.  They removed Mr Lewis’ heart and then installed the device -the patient was up, well and speaking with physicians the very same day.

Dr. Cohn is a veteran surgeon, as well as an inventor and researcher who has spent a large portion of his life developing technologies to replace or repair the human heart. The most notable device being what is called the Left Ventricular Assist Device, also known as LVADs.

Cohn teamed up with Dr. Bud Frazier to develop a new invention that uses the technology from LVADs to replicate the functions of the heart’s right and left ventricles.  They (unfortunately) tested their device on 70 calves, all of whom produced a flat line on an EKG, no heart rate or pulse, yet they were perfectly normal, ate normally and interacted with each other normally but again, had no heart beat.

As mentioned above, Craig Lewis was the first human to receive this technology. The procedure took less than 48 hours and was a great success. His kidneys and liver were not so lucky however, they were failing him and after a few months his family asked the doctors to unplug the device.

Below is a video titled “Heart Stop Beating.” It’s the story of these two doctors and the process they had to go through to replace this man’s dying heart with a ‘continuous flow’ device.

What does this mean for individuals who have their heart replaced with a piece of mechanical machinery? Does this mean that they are not able to affect others because there is no electromagnetic field that’s being radiated from the heart, or feel the effects of others?

Does this mean that all of our internal organs, including our brain, serve solely biological functions? Does this mean that our thoughts, feelings, emotions, perception of the world and various factors that are associated with consciousness originate from outside of the body? What do you think?

Imagine if all of the organs were one day able to be replaced with some sort of advanced technology that was able to mimic their biological function, including the brain. Would we still be the same? This concept brings up several interesting philosophical issues and questions, and that’s why it caught my attention. Feel free to share your thoughts about it in the comment section below. I also found it fairly significant and worth sharing because it is another medical advancement (a good one) that can save many lives.