The radio telescope located in South Africa has captured a mysterious radio signal near the Southern constellation of Ara, which could indicate the existence of a star system in our galaxy. The team of scientists who were analyzing part of the southern sky, near the constellation of Ara or Altar, detected a radio emission of an object brightened by a factor of three for about three weeks.

Scientists describe this scheme as an “unusual flare ” from a binary star system – two stars orbiting each other – in our own galaxy. 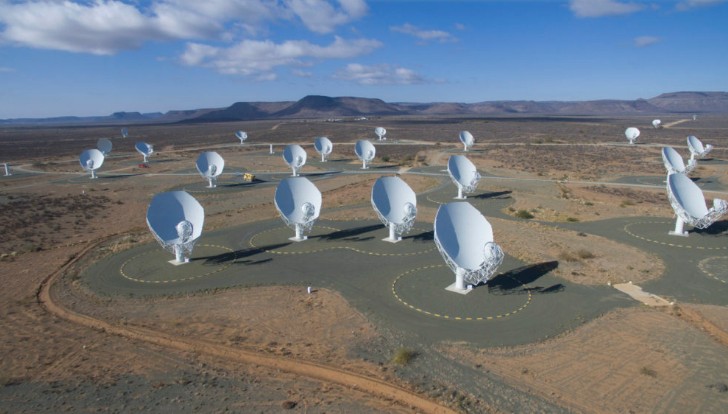 The new MeerKAT radio telescope, inaugurated last year, is located in the Karoo desert in South Africa and was used for its detection. The phenomenon recorded is a “transient source”, ie a non-constant source.

The signal was called MKT J170456.2-482100 and could only be the beginning of a series of “messages” coming from the other star system, since it was found only in the first field observed with the telescope. After using the data obtained from other optical telescopes that detect visible light instead of radio waves, they were able to obtain other observations of the star. It is a gigantic star with a mass of about 2 and a half times the mass of the Sun. Data collected for 18 years by telescopes have been observed, discovering that the brightness of the star changes over a period of 21 days. Furthermore, the star has a magnetic field and orbits around its partner every 21 days. Radio emission detected during the measurement, with the flare circled.

Radio signals could be explained by the magnetic activity of the giant star; however, there are no signs in the spectrum that the binary partner, for now not visible, is actually a Sun-like star. It should be noted here that it is not known what kind of star is the partner of the giant star and whether it has a planetary system from which radio signals would start.

In a Greek myth, Ara signifies and represents the altar of King Lycaon of Arcadia. Listed by the Greek astronomer Ptolemy, Ara was one of the 88 constellations in the 2nd century.

Ben Stappers, principal investigator of MeerTRAP, one of the teams working on the project, said that because the properties of the system don’t easily fit into our current knowledge of binary or flaring stars, it “may represent an entirely new source class”.

Stappers added that it could be an exotic star system never seen before and that it involves a giant star in orbit around a neutron star, (the dense residue of a supernova star explosion) or a black hole. For now, nothing is certain about the radio signal received from this star system.

As MeerKAT continues to search the sky, we hope that this is the first of many new and unusual sources waiting to be discovered.

In this article:alien signals, constellation of Ara

Andrew Griffin ‘Alien’ sounds have been captured at the edge of space. The hisses and whistles heard in the recordings were captured 22 miles...

Mysterious Unexplained Short Signals From Outside Our Galaxy

These signals are very short and originate from outside of our galaxy, the Milky Way. They are baffling astronomers and the nature of the...