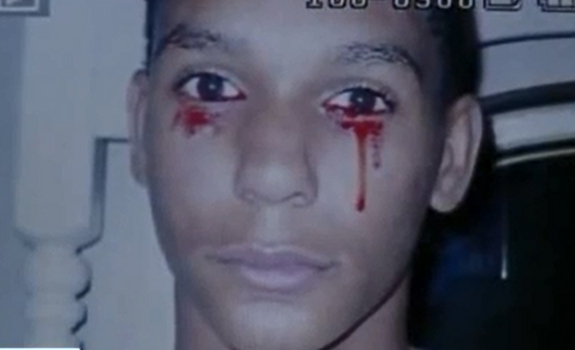 A young man from Tennessee is living with an alarming medical condition — without warning, he begins to bleed from his eyes. And some of the best doctors in the country are completely stumped by his ailment.

What’s more confounding is that the condition is very rare, but some of the only other people known to bleed from the eyes — a condition called haemolacria — are also from Tennessee.

At age 22, Michael Spann was walking down the stairs of his home in Antioch, Tenn., when he was gripped by an extremely painful headache. “I felt like I got hit in the head with a sledgehammer,” he told the Tennessean. Moments later, Spann realized that blood was trickling from his eyes, nose and mouth.

The bleeding and headaches became a daily occurrence for Spann; now, about seven years later, they happen only once or twice a week. Though he’s hampered by a lack of health insurance, doctors in Tennessee and at the Cleveland Clinic performed an exhaustive series of tests, but were unable to pinpoint a cause or recommend a treatment, according to news reports.

‘Thought I was going to die’

In 2009, Calvino Inman was shocked by what he saw in his bathroom mirror: blood streaming from his eyes. “I looked up and saw myself, and I thought I was going to die,” he told CNN. The teenager from Rockwood, Tenn., was rushed to the local emergency room, but doctors could offer no insights into the perplexing case. A battery of tests — including a CT scan, an MRI (magnetic resonance imaging) and an ultrasound — offered no clues.

The phenomenon of haemolacria has puzzled doctors for centuries. In the 16th century, Italian physician Antonio Brassavola described a nun who, instead of menstruating, would bleed from her eyes and ears each month. In 1581, Flemish doctor Rembert Dodoens examined a 16-year-old girl “who discharged her flow throughout the eyes, as drops of bloody tears, instead of through the uterus,” according to a 2011 report in the journal The Ocular Surface.

Dr. Barrett G. Haik, director of the University of Tennessee’s Hamilton Eye Institute in Memphis, co-authored a 2004 review of four known cases of haemolacria, published in the journal Ophthalmic Plastic & Reconstructive Surgery. The authors concluded that “bloody tearing is an unusual clinical entity that concerns patients and can perplex physicians.” However, such “cases typically resolve without treatment.”

Indeed, in each of the four cases reviewed, the patients — one boy and three girls, ages 6 to 14 — simply stopped weeping blood, and the condition never returned. Haemolacria can be caused by a head injury or other trauma, but these cases, like Inman’s and Spann’s, were idiopathic (of unknown cause). “When you can’t find an origin, you can’t eliminate any of the possibilities,” Haik told CNN.

“Most of these were relatively young patients,” Dr. James Fleming, an ophthalmologist at the Hamilton Eye Institute and co-author of the 2004 review, told the Tennessean. “As they matured, the bleeding decreased, subsided and then stopped.”

Until the bleeding stops, Spann — a talented artist who had hoped to pursue a career in fashion design — is forced to live a reclusive life. “Any job I get, I lose, because my eyes start bleeding and they can’t keep me on,” Spann said. “Obviously, I can’t be a waiter and work in any public thing because you are bleeding.”

He is also forced to live with ridicule: “I have kids that ride by on bikes in this neighborhood who point and say, ‘That’s the guy who bleeds,’” Spann told the Tennessean. “I really don’t want more than that.” Spann has tried to contact Inman to share his ordeal with a fellow sufferer, but was unable to connect with him.