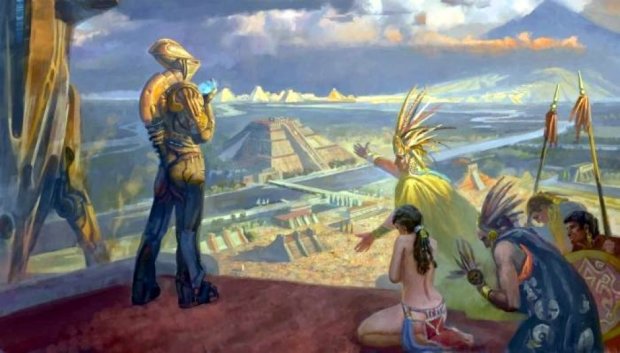 The question of how exactly our planet received life remains open. Some scientists believe that the first living organisms appeared on Mars. Others indicate that many amino acids have been discovered in space. And therefore, life could appear in the entire solar system at the same time.

What is out there in the solar system? Living organisms, in their opinion, are everywhere in space. And somewhere, life advanced very quickly to complex forms. And somewhere, it remained at the microbial level.

Among researchers there are those who believe that planet Earth is not really the birthplace of mankind. And that we, in fact, appeared in some other place in space. And we just settled this world once in ancient times.

This is not our planet

There is one environmentalist in America, his name is Dr. Ellis Silver. A few years ago he wrote a book in which he reflected the above point of view

People are not at all from the Earth

Neanderthals startled and looked at each other.

The author claims that humans cannot be “natives” on this planet. And perhaps they came here from completely different places. Silver makes arguments based on human physiology. He suggests that we did not evolve along with other forms of life on Earth. But in fact, we arrived from somewhere else in the universe. Or some extraterrestrial beings brought us here tens of thousands of years ago.

Does that sound crazy? Or is it contrary to your beliefs? Having read this, your friends may be ready to laugh at you and tell you that you are reading insane theories? Do not listen to them. It is believed that higher entities were actually left to watch us …

But seriously – why not? Maybe we really look at familiar things in a different way? After all, we really want to understand our tasks in this world and find out our real origin. In addition, Silver is still an environmental scientist. He devoted his life to cleaning the Pacific Ocean from plastic waste. And, besides, Silver claims that his book is based on completely scientific works. They studied the obvious differences between humans and other animals.

So what are the facts and arguments of the ecologist?

Does your back hurt? Time to go home

Silver believes that some chronic human diseases, such as back pain, may indicate that people actually evolved in a world with less gravity. The scientist also talks about other unique human traits. For example, that babies have relatively large heads and women have difficulties in childbirth. (The question is debatable here. It turns out that in our native world, babies have smaller heads or something?). Silver argues that no other species on Earth has such a problem. He also points to 223 additional genes in humans that are not found in any other genome of an earthly being.

Silver believes that the human race has “serious flaws” testifying that we are not from this world.

“We are all chronically ill,” says Silver. “If you find a person who is 100% healthy and does not suffer from any (possibly hidden or unidentified) condition or disorder (there is an extensive list in the book), I will be extremely surprised. I haven’t seen such people. ”

Yes, it was not without reason that the famous saying was born that there are no healthy people. This topic is severely unexplored.

“I believe that many of our problems stem from the simple fact that the clocks of our internal organism evolved in a 25-hour cycle. This has been proven by sleep researchers. But the earthly day lasts only 24 hours, ”the scientist writes.

In his book, Silver suggests that one of the possible places where a person actually appeared is Alpha Centauri, the star system closest to the sun.
What other arguments does the scientist give? He writes that humanity is obviously the most highly developed species on the planet. However, man is surprisingly poorly adapted to the conditions that our planet provides. Sunlight gives us cancer. Natural (raw) foods disgust us. We have an extremely high level of chronic diseases and much more. Plus, many people have the feeling that they are strangers in this world. They feel like guests on this planet.

Silver suggests that humanity did not evolve on Earth from a specific local ancesto but was developed in a completely different place. We were transferred to Earth as a fully developed species of Homo sapiens somewhere between 60,000 and 200,000 years ago.

Could an American environmentalist be right? Could it be that this planet is just our colony? The idea is interesting. And there is not a single argument that would completely reject such a possibility …