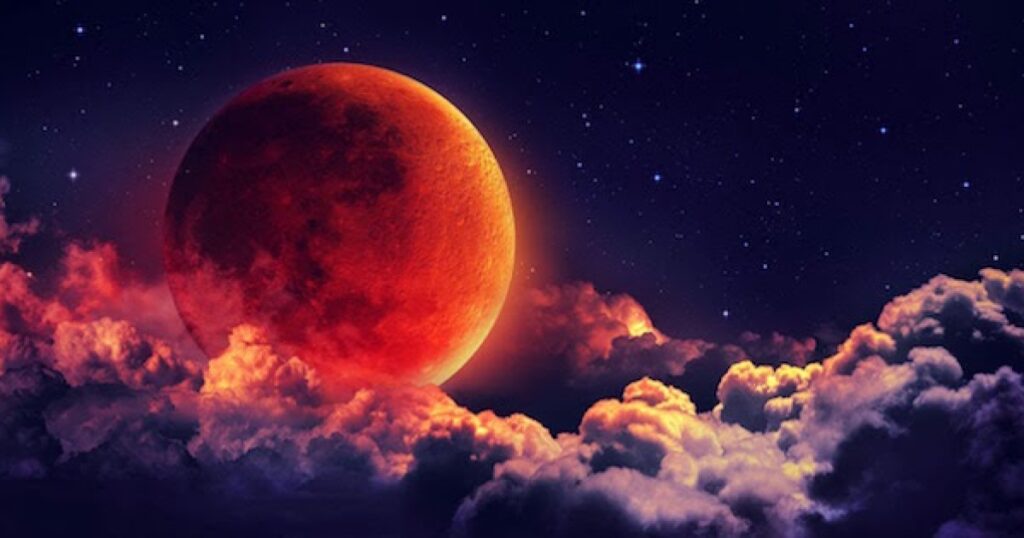 May 26 will usher in the biggest blood moon of the year, and the rare spectacle of a total lunar eclipse meeting a “super blood moon” will be staged in the sky.

“When the sixth seal was opened, I saw the earth shake again, the sun turned black like woolen cloth, the full moon turned red like blood, and the stars in the sky fell. On the ground, it is like a fig tree being shaken by a strong wind and dropping its immature fruit. The sky moves, as if a scroll is rolled up, and mountains and islands are moved away from its place.”

The Bible says it’s clear that the red moon is the end of the world.

However, what is disturbing is that multinational meteorological bureaus and astronomers said that May 26 will usher in the biggest blood moon of the year, and the rare spectacle of a total lunar eclipse meeting a “super blood moon” will be staged in the sky.

Does this mean that humans will have greater disasters? In religions and folklore around the world, blood moons are indeed often regarded as precursors of disasters or unusual events.

What is a blood moon

When the sun, earth and moon occurs in a straight line and a total lunar eclipse, the blood moon appears. To explain with modern science, it means that the whole of the moon enters earth’s shadow without direct sunlight, because the atmosphere absorbs all the purple, blue, green and yellow light, leaving only the red light to penetrate and refract to the surface of the moon to form it. The dark red moon is the “total lunar eclipse”.

And May 26 this time, a total lunar eclipse coincides with the lunar perigee, this year’s biggest full moon, full moon will appear bigger and brighter. At that time, the color of the moon will be rusty red, so it is called the “super blood moon”.

In addition, people can also see the spectacle of the “Blood Moon” after three years, when the moon will be rusty red, because it is called the “Super Blood Moon.”

Since ancient times, in religions and folklore around the world, the “blood moon” has been regarded as an ominous omen, symbolizing evil and disaster.

Imagine a huge, blood-red moon hanging high in the night sky, and its pouring “blood light” enveloped the slightly trembling earth. Does it feel a bit scary?

In ancient Europe, people thought that the the appearance of the blood moon coincides with the infestation of vampires and werewolves, and it heralded that the dark magic was awakened, the demons were resurrected, and the world fell into blood and light, which was a sign of disaster.

The Mayans also believed that when evil descended on the world, it would swallow the moon first, and the moon would turn red at this time. So the Maya began to hold special rituals to drive away evil. There are also records of blood moons in other parts of the world.

Four Blood Moons in a Chain

Having said about the Blood Moon legend, what is more dangerous in fact, is the “series of four blood moons” or “four blood moons”, which means that a blood moon appears in 4 months within a two-year period. It is an astronomical phenomenon where 4 total lunar eclipses regularly occur every 6 months.

The “four blood moons” are quite rare in history, having only appeared four times in the past 500 years. Every time it occurs, there will be major events in the world, or the frequency of disasters will increase sharply.

According to NASA’s estimates, the next “four consecutive blood moons” will appear in 2032 and 2033. In today’s days it seems that natural and man-made disasters continue to make people have nowhere to escape. What should we do? We have always firmly believed that the only way to survive the historical disasters and enter the new era is to choose a firm belief in God and be good at heart.