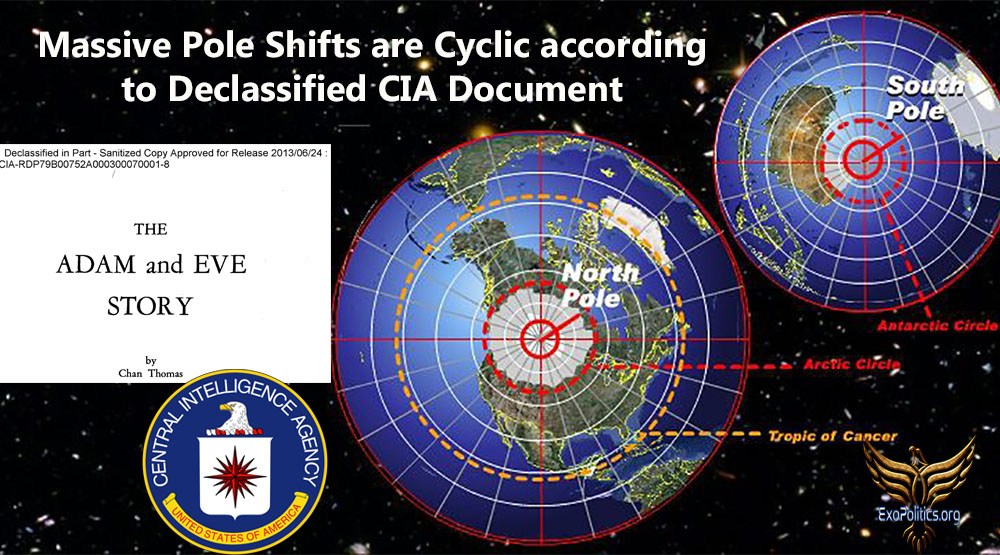 Ben Davidson, founder of Space Weather News, began his six part Earth Catastrophe Cycle video series by discussing a 57 page booklet called “The Adam and Eve Story” authored by “Chan Thomas”, which was classified by the CIA at some point after its 1963 publication, and declassified in part on June 24, 2013 with the release of a sanitized digital version on the CIA’s website.

Thomas’ analysis of cyclic pole shifts was different in key respects to what was being proposed at the time by Charles Hapgood in his seminal book, The Earth’s Shifting Crust(1958).

According to Davidson, it was Thomas more accurate explanation for how a pole shift happens, which led to the CIA classifying Thomas’ book.  The Adam and Eve Story was first published in 1963 by Emerson House, with a third edition published in 1965, and then republished by Bengal Tiger Press in 1993. It is not clear when, why and how the CIA classified Thomas book, but the fact that the CIA chose to release a declassified sanitized version in 2013 is very significant.

In part 1 of his video series, Davidson contrasts Hapgood’s wandering pole hypothesis with the pole shift described in the CIA suppressed book by Thomas.

Hapgood wrote of a pole shift of up to 40 degrees that could recur every 5000 years or so in The Earth’s Shifting Crust where earlier geographical poles would wander on the Earth’s surface with each crustal displacement.

Instead, Thomas wrote of a massive shift of almost 90 degrees  that would move both poles into the tropics in less than a day, and then back to their earlier polar positions after the next cycle:

In ¼ to ½ a day the poles move almost to the equator, and all hell lets loose. The atmosphere and oceans don’t shift with the shell – they just keep on rotating West to East – and at the equator that speed is 1000 miles per hour. It has to be, normally, to make one rotation per day. So, while the shell shifts with the poles going toward the equator, the winds and oceans go eastward, blowing across the face of the earth with supersonic speeds, inundating continents with water miles deep….

You can see, then,  that ice ages are not a matter of advancing and retreating ice; it’s simply that different areas of the Earth are in polar regions at different times, for different durations of time, with the changes between positions taking place in a fraction of a day. [The Adam and Eve Story, pp.13-14]

Thomas provided a table illustrating how the North pole, for example, would switch back and forth between northern hemisphere regions after experiencing close to a 90 degree tilt.

It is Thomas’ conclusion of cyclic pole shifts of almost 90 degrees that flip the poles back and forth over millennia that Davidson identified as the key reason the CIA classified Thomas’ work. If the North and South poles flipped back and forth 90 degrees, there would be little evidence of previous pole shifts since these would be buried under thick layers of ice.

Davidson cited a number of scholarly articles which studied paleomagnetic data from volcanic hotspots. A highly regarded 1985 paleomagnetic study titled, “True polar wander: An analysis of Cenozoic and Mesozoic paleomagnetic poles” found “the pole has moved 22 deg + or 10 deg in the past 180 m.y.[million years].” This was far less than the 40 degree wandering pole hypothesis that Hapgood proposed in an approximate 5000 year period.

A subsequent 2001 study titled  “Stability of the Earth with respect to the spin axis for the last 130 million years” concluded that “the time-averaged position of the spin axis has deviated by no more than ˜5° over the last 130 million yr, indicating that mantle mass heterogeneities have not changed rapidly enough to drive TPW [True Polar Wander].” Davidson cited these and a 2018 study as the key elements of the body of scientific evidence refuting Hapgood’s wandering pole hypothesis.

However, as Davidson pointed out, the scientific data from paleomagnetic studies did not address Thomas’ theory of the poles flipping back and forth over geologic time, thereby giving the appearance that the poles had not moved over millions of years as researchers had mistakenly concluded:

Davidson goes as far as suggesting that Hapgood, who worked for the CIA’s predecessor the Office of Strategic Services during World War II, conducted a “limited hangout” with his 1958 book to get some of the truth out into the public arena, but doing so in a way that could be eventually discredited.

Davidson cited a 1994 book titled World in Peril about the once classified information provided by an Arctic polar explorer, Major Maynard White, who told his son, Ken (the book’s author), about secret Pentagon meetings in 1948 where suppression of evidence of cyclic pole shifts was discussed:

At one of the scientific meetings that Major White attended in the Pentagon in early 1948, the scientists discussed the advisability of alerting the public to the pending polar-flip phenomenon. None of the scientist would agree to withhold the information from the public, but, on the other hand, neither could they agree on how to release it. The knowledge of this phenomenon, some felt, could in itself destroy the moral fiber of society. Their fears were apparently unfounded when, in the early 1950s, information about the flip phenomenon was released in both a newspaper column and a magazine article, but surprisingly generated no responses from an apparently stunned parochial or incredulous public.

Given the amount of scientific data presented by Davidson in his Earth Catastrophe Cycle series, it’s clear that physical pole shifts of approximately 90 degrees have been historically recorded, and that this became known to government authorities as early as 1948.