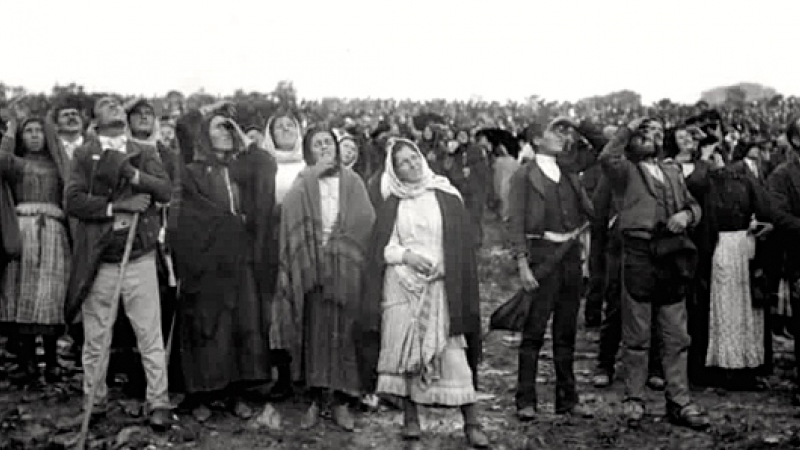 In 1917, thousands of people gathered in the Portuguese city of Fatima to see the apparition of Virgin Mary and even those who were here on business or passed by saw her, which completely excludes a mass hallucination.

But the Virgin Mary behaved somewhat strangely, she turned into a ball, emitted rays of heat and eventually dissipated. This was the final, but far from her only phenomenon.

It all started with the fact that in 1915, a formless ghost appeared to 8-year-old Lucia, while she was reading a prayer. A year later, it appeared to three children in the form of a young man who called himself an angel and told them to pray in a certain way.

After some time, the spirit appeared again to the children and demanded that they pray more diligently and also offer sacrifices and endure suffering. The Spirit said that God was very angry with them for their sins. After contact, the children noted that they could not even walk, all their strength was as if sucked out.

The following year, the children saw an apparition of a woman in a dazzling white glow. The woman said that she came from heaven and would come every 13th for six months. She told them to devote themselves to God, to pray daily and endure suffering and torment for their sins. She also promised to take the children to heaven and kept her promise. Lucia’s friends died the next year from the “Spanish flu”

On the following 13th, 60 people gathered around an oak tree to watch the phenomenon. Only children could clearly see it, to the rest it seemed to be a vague cloud.

On this visit, the spirit ordered the children to sacrifice themselves for the sinners and made predictions: the spirit said that World War 1 would end, but the second would soon begin. She also requested that Russia be dedicated to her Immaculate Heart. The Spirit insisted that the Portuguese children dedicate distant Russia to the Immaculate Heart of the Virgin Mary (whatever that meant).

On her next visit, the Virgin told them to build a chapel for herself and pray to her even more and offer sacrifices. The children asked to heal the sick, but she replied that she would only heal some of them. She also allowed the children to remove the ropes for the night.

By this point, the children were already tightening themselves with ropes at the direction of the Virgin to undergo great suffering, in fact imposing penance on themselves. By now, the Spirit had already been seen in the form of a cloud by 30 thousand people.

Her last coming gathered 70 thousand people, from all over the neighborhood, newspapermen, adventurers and just curious. And they saw it: there was a radiance and an image of the Virgin in it.

Lucia spoke to her and she again demanded to build a chapel for herself and pray. After, it turned into a fireball and rays of all colors of the rainbow emanated from the ball. People were frightened, some rushed to kneel and others ran. People were doused with warmth and their clothes instantly dried up after the rain.

The story ended like this: two children died the next year, as promised by the Virgin, Lucia became a nun and lived until 2005. The third prediction was classified by the Vatican and, despite the fact that it was supposed to be disclosed in 1960, it was partially disclosed only in 2000. It spoke of a vision of soldiers shooting at the Pope and bishops.

The Catholic Church investigated this phenomenon for 13 years and took it so seriously that the Popes twice dedicated not only Russia but the whole world to this Virgin. In fact, they performed the ceremony at the request of a ghost.

Who it was after all: an evil spirit or the Mother of God?

The spirit demanded worship for itself, called itself a queen, and was clearly fueled by energy. The constant prayer of children and sacrifices increased the strength of the spirit and it manifested so more people can see it.

Does the real Mother of God need to suck out the child’s strength in order to appear before people?

The Fatima phenomenon was most possibly not the Mother of God, but a demon feeding on people’s energy, the more people prayed to him, mistaking him for the Virgin, the stronger he became.

By absorbing the energy of many people waiting for him, the energy of prayers, suffering, offerings, the spirit received its own. But the worst thing is that the Pope of Rome obeyed the demon and conducted a rite of dedication to the World and Russia in particular by his power. In fact, the popes gave the world to the demons. Twice!

By the way, some do not recognize the appearance of the Mother of God and consider it rather a diabolical manifestation, because the Antichrist also has magical power and can perform miracles.