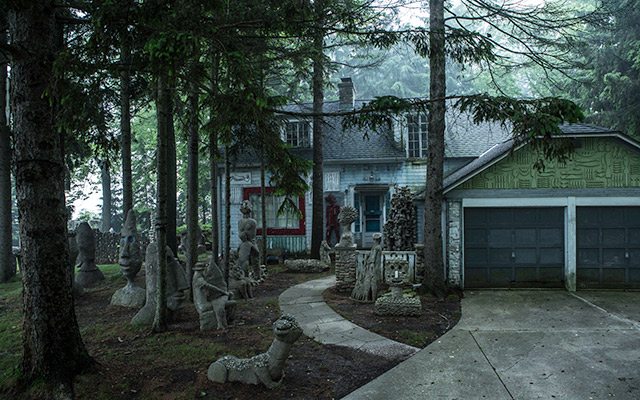 The Witch’s House is a Milwaukee landmark with an eerie legend, but the only magic Mary Nohl was conjuring was her yard full of strange sculptures.

There is a curious old home in the Milwaukee, Wisconsin suburb of Fox Point, a cottage on the shore of Lake Michigan, which has been the source of urban legend for decades. My dad drove me past it when I was a kid. The yard was filled with large concrete sculptures of giant heads and abstract figures. Humans, fish, and other water creatures all made with materials gathered from the beach.

Frightened whispers of countless curious visitors tell a story as chilling as the howling wind that blows in from the lake, the tragic tale of a reclusive old woman whose husband and son drowned in the turbulent waters just offshore from their home. In her grief, they say, the “Witch of Fox Point” constructed the bizarre sculptures to keep watch for her lost loved ones to return.

But Mary Nohl was never married, and had no children. She was an artist who conjured fantastical creations that transformed her home into her masterpiece – which continues to be a thorn in her neighbor’s sides to this day.

“Mary cared nothing about conforming, resisted the stereotypical roles for women of her generation,” Barbara Manger, author of Mary Nohl: Inside & Out, said in a 2009 interview. “She set her own direction and pursued creating regardless of the views of others.”

In that way, maybe Mary really was a witch – a strong, independent woman who lived the life she chose regardless of societal expectations.

And it seems she had a sense of humor about the legend, if the word “boo” formed by beach pebbles on her front step is any indication. 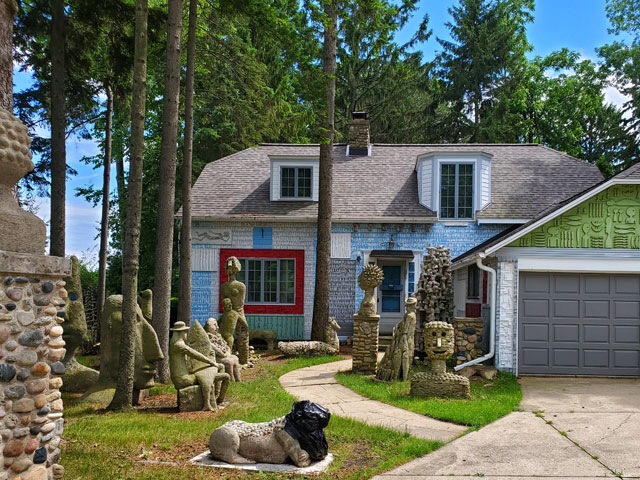 Mary was born to Leo and Emma Nohl in 1914. Leo was an attorney in Milwaukee. The Nohls bought the lot where the house stands now on North Beach Road and built a small prefab cottage as a summer retreat in 1924. It quickly became 10-year-old Mary’s favorite place. At the time, the road was little more than a dirt path and wasn’t plowed during the winter, so it wasn’t an ideal place to live year round.

That changed by the early 1940s, though, and the Nohl’s hired an architect to build an addition. There were some delays during construction as World War II caused a shortage in building materials, but the house was eventually completed in 1943. The Nohls sold their Milwaukee home and moved in.

Mary graduated from the Art Institute of Chicago in 1937. She taught art in Baltimore and Milwaukee until 1943, when she decided that making art was more enjoyable. She opened a pottery studio in Milwaukee and moved back in with her parents at the house on North Beach Road, where she would spend the rest of her life.

Mary’s parents died in the 1960s, leaving her a sizable inheritance. She didn’t have to work anymore, so she began filling the home where she now lived alone with her creations of concrete, scrollsawn wood, driftwood, glass, bone, and other found objects.

The spectacle soon attracted curious visitors, and with them, vandalism. But Mary didn’t let that hinder her creativity.

“I was awakened early one Sunday morning to the sound of a crackling fire,” she wrote about a particular incident, probably in one of her biannual mimeographed newsletters she sent to friends and family, “and relieved to find that the fire was burning a driftwood figure in the front yard – and not the house. This particular sculpture has been a target for the kids for years – about fifteen feet high and so encrusted with paint and so dried in the sun, that the burning was like a series of explosions. Called the poor, overworked police who sat in three squad cars outside the fence and watched it burn. Sass, Basil and I sat inside and watched from the front window with the aid of a beer. All that was left were two ten-foot pipes anchored in cement, and before the last sparks had drifted off I had plans for my largest cement animal. The two pipes conveniently became the two front legs of a less destructible cement creation.” 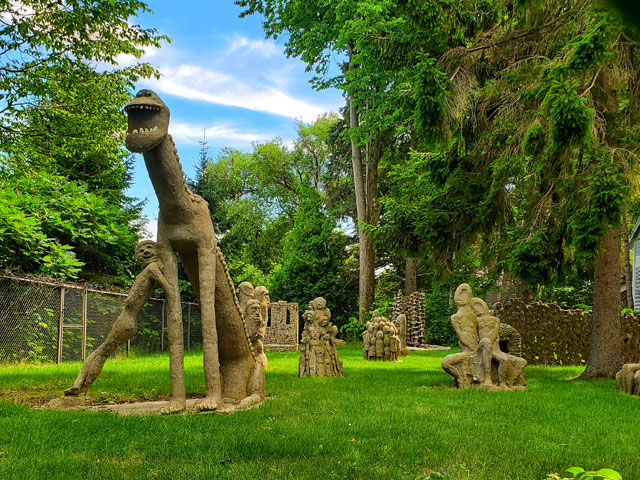 Mary died in 2001 at the age of 87. She left her home and sculptures to a philanthropic organization called the Kohler Foundation that works in the areas of art preservation, grants, scholarships, and performing arts. Her estate of over $11 million went to the Greater Milwaukee Foundation to oversee the administration of the Mary Nohl Foundation and Mary Nohl Fellowship, providing arts education for children and scholarships for artists.

North Beach Road is a wealthy area, and to Mary’s neighbors, her home was an eyesore. They petitioned the city to have it demolished. Instead, the property was granted entries in the Wisconsin Registry of Historic Places and the National Register of Historic Places, and is now protected.

The Kohler Foundation wanted to open it to the public, but a decade-long struggle with residents and zoning laws proved unsuccessful. In 2014, a plan was announced to move the entire house and sculptures to a more accessible site in Sheboygan County, but it has since been cancelled because the art was deemed too fragile to move. 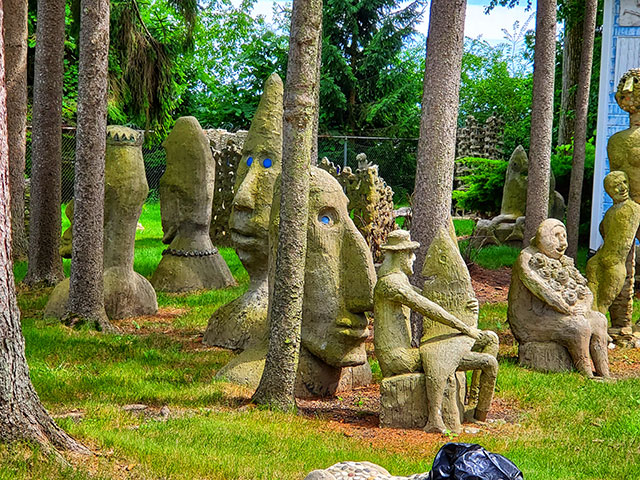 Conservators have cataloged hundreds of individual works of art from inside and outside Mary’s home. In her master’s thesis on Nohl, Debra L. Brehmer categorized the yard sculptures into four distinct groups: monolithic heads, figures and groupings, mythic animals, and architectural ruins.

“To build these pieces,” Brehmer wrote, “Mary first develops a rough idea on paper. She then makes armatures out of metal rods, old pipes, fence wire or tin and fills in the forms with stones she collects by the beach in an old red wagon. She applies concrete in sections, from the ground up, allowing each to dry for two or three days before adding the next. She often combs or trowels a texture into the wet medium and adds subtle decorative flourishes, such as beach stone, marbles or reflector eyes and ornamental bits of pottery or tile.”

Among the various exhibitions of Mary’s work over the years was the “Greetings and Salutations and Boo” installation at the John Michael Kohler Arts Center in 2017, which included Mary’s intricately embellished living room, carefully removed from her home and reconstructed for the exhibit. 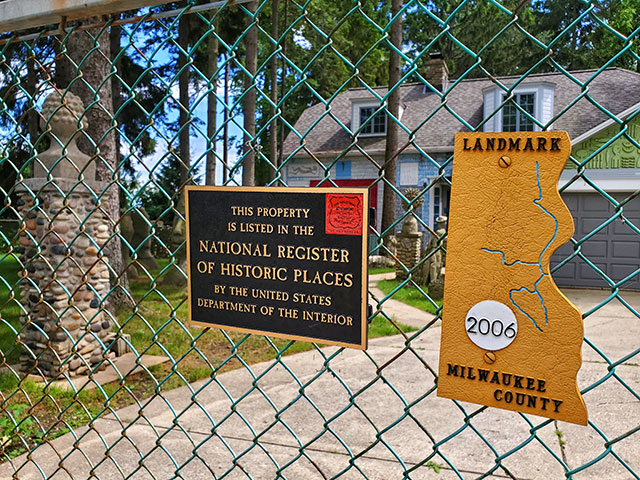 That may be the closest most of us will ever get, as the house itself remains a private residence for a caretaker from the Kohler Foundation.

The National Register of Historic Places record calls the Mary Nohl Art Environment “one of Wisconsin’s most original and outstanding works of art.”

Advertisement. Scroll to continue reading.
In this article:Mary Nohl, Milwaukee 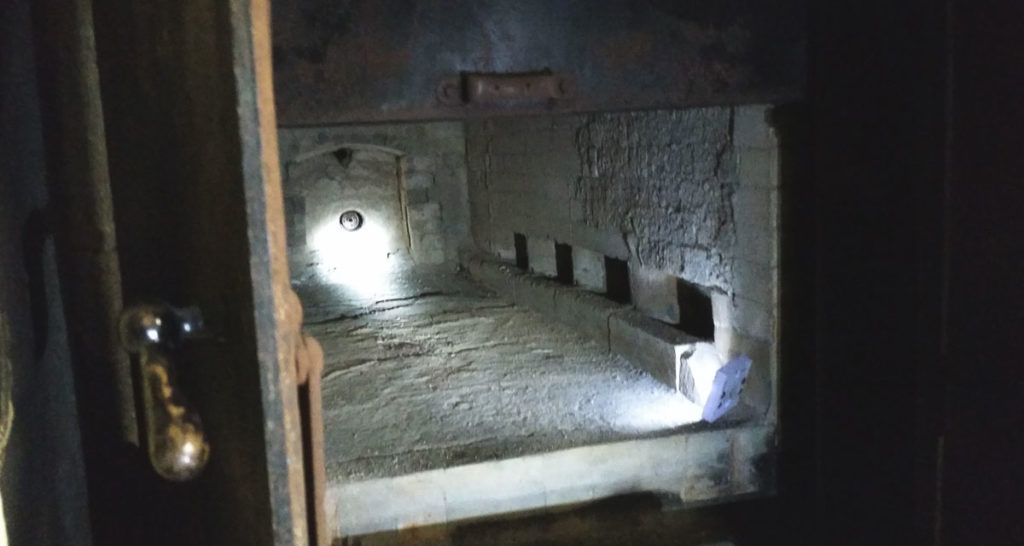 The “man they couldn’t hang,” a priest’s lonely crypt, the Midwest’s first crematorium, and other strange bits of history can be found in Milwaukee’s...