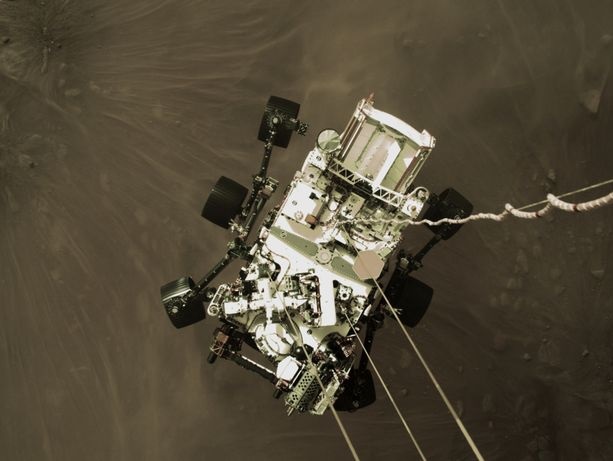 Real footage of the landing of the Perseverance rover on Mars

Millions of people around the world watched the Perseverance rover broadcast an amazing 360-degree panorama of the Martian surface. Many were sure that this was real footage, but experts said it was a fake. The footage that thousands of people were sharing online was a hoax. This was reported on the pages of the “Daily Star”.

Just a few hours after the Perseverance rover landed on the surface of Mars, footage surfaced on the Web, which captured the eerie view of the rocky surface of the Red Planet. The video presented was accompanied by a soundtrack on which the harsh Martian wind was allegedly recorded. It took a little time for experts in the field of video editing to figure out what’s what. They believe that they were clearly “slipped” a fake.

Here’s a screenshot of the fake Perservance video:

The fact is that all these frames were actually filmed on Mars, however, they were made not by Perseverance, but by the Curiosity rover, which has been surfing the Red Planet since 2012. Moreover, the word “Curiosity” can even be seen in the video.

In addition, according to experts, the sent image, in principle, cannot be called a video, since it is “edited” from several still images, according to Inverse.

As for the audio track, it was obtained from a seismometer installed on Mars, and then added to the video, which by now has already spread thousands of times on the Internet.

Astronomers are concerned that the fake video distributed on social networks continues to be “replicated” in accounts, misleading netizens.

Astrophysicist Katie Mack of the University of North Carolina told Inverse, it sounds like you expect to see something amazing, and you are shown a cheap fake that is passed off as the real thing.

The Perseverance rover recorded and sent Martian sounds to Earth. The result may disappoint many – it turns out to be very quiet on the Red Planet.

“Now that you’ve seen Mars, hear it. Grab some headphones and listen to the first sounds captured by one of my microphones, ”- according to the official Twitter of the rover.

More Martian sounds are invited to listen to the NASA website.

Netizens are trying to prove that they were able to decipher a hidden message that is present on the parachute of NASA’s Perseverance rover.

In the form of a picture on a parachute, the words “Dare to do great things” were encrypted. In order to translate the picture into letters, it was required to use a special binary code.

The red and white pattern seemed very strange to users on Reddit and Twitter. They labeled red as 1 and white as 0. Each ring that was present meant a different word. As a result of the decryption, it was possible to obtain the motto used by the Jet Propulsion Laboratory, which took over most of the work of launching Perseverance.

It is worth noting that this phrase was first used by Theodore Roosevelt during one of his speeches in 1899. The pattern for the parachute was chosen by NASA. The main purpose of this figure is that the specialists were able to determine at what angle the parachute was deployed and whether it was twisted.

An interesting point is that this is far from the first and not the last hidden message that was left on the Perseverance rover. For example, on the aluminum plate, there is an image of the Staff of Asclepius, which is an ancient symbol of medicine and is considered a reference to the coronavirus pandemic.