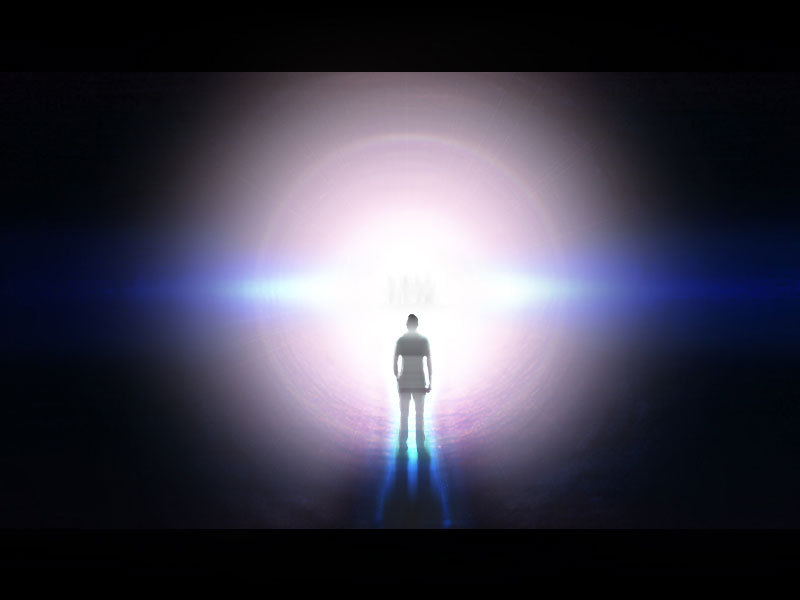 Brian Miller was declared dead after suffering a massive heart attack at a Ohio hospital.

Then to the surprise of nurses and doctors, after 45 minutes, his heart randomly started beating again.

Miller, 41, told WJW-TV that while he was out, he saw a light and relatives who had passed away.

Miller said he remembers walking along a “heavenly” path lined with flowers.  He was then stopped by his mother-in-law, who had just passed away.

“She grabbed a hold of my arm and she told me that, ‘It’s not your time.’”

Miller said he met another relative before waking up.

Despite that for 45 minutes his brain did not receive any oxygen, doctors said Miller did not suffer any brain damage.

“There is an afterlife and people need to believe in it,” he said.

Miller’s experience is familiar to researchers who study near-death experiences or NDEs.

Belgen Dr. Steven Laureys studies near-death experiences.  He leads the  Coma Science Group at the university hospital in the city of Liege. He and his colleagues published a scientific study on NDEs late last May.

Laureys says people who experience NDEs are often forever changed. They report no longer fearing death and say the experience becomes the cornerstone of their life.

His hypothesis is that near-death experiences originate in human physiology. “It is this dysfunctional brain that produces these phenomena,” he said.

Laureys and his staff are interested in how the brain creates the mind and its perception of reality. “Our main focus is consciousness research in comatose patients,” he said.

Scientific research on people having NDEs is tough, because the exact instant that they occur is unknown, making them nearly impossible to observe, Laureys said.

It would also be cruel to run brain scans on someone who was possibly facing the moment of death.

So, Laureys and his team studied the near-death memories of people who survived — in particular those of coma patients — with the help of a psychological examination.

The Memory Characteristics Questionnaire tests for sensory and emotional details of recollections and how people relive them in space and time. In other words, it gauges how present, intense and real a memory is.

They compared NDEs with other memories of intense real-life events like marriages and births, but also with memories of dreams and thoughts — things that did not occur in physical reality.

The researchers paralleled new memories with old ones. And they compared the patients who had NDEs with groups of others who didn’t.

Memories of important real-life events are more intense than those of dreams or thoughts, Laureys said.

The coma scientists weren’t expecting what the tests revealed.

“To our surprise, NDEs were much richer than any imagined event or any real event of these coma survivors,” Laureys reported. Results of a psychological test reveal memories of Near Death Experiences to be more vivid than any other memory. (Photo: Dr. Steven Laureys)

The memories of these experiences beat all other memories, hands down, for their vivid sense of reality. “The difference was so vast,” he said with a sense of astonishment.

Even if the patient had the experience a long time ago, its memory was as rich “as though it was yesterday,” Laureys said.

“Sometimes, it is hard for them (the patients) to find words to explain it.”

The questionnaire asks people about their level of certainty that a remembered experience was a real event and not imagined or dreamed. “They (the patients) are very convinced that it is real,” Laureys said.

A simple Internet search reveals hundreds of accounts of near-death experiences — some real, some perhaps invented. Many people are convinced they are proof positive that an afterlife exists outside of the physical realm — and that it is wondrous.

There are reports of religious images appearing at times in NDEs, but they are not limited to one single religion, and they don’t always appear. Sometimes Buddha, Jesus or Mohammed appear, but usually they don’t, Laureys said.

Nevertheless, an NDE can make a convert of a skeptic. Dr. Eben Alexander is a well-known case of an agnostic scientist who became convinced of the existence of the spiritual.

He has often shared his story in television interviews with journalists and expressed his views in lectures and in books and video presentations, which he sells on his website.

Alexander, a neurosurgeon, according to his autobiography, has described his experience in the same terms as the Belgian researchers: “hyper-reality,” “too real to be real.”

In the beginning, he tried to interpret his experience as a brain function, he wrote on his website, but he became increasingly spiritual. He has come to the conclusion that people are reincarnated.

Alexander says his experience could not have been a hallucination, because the parts of the brain necessary to produce his experiences were basically dead when he had them.

Scans compare neurological activity in a brain that is healthy, one that is comatose and another that is dead. (Photo: Dr. Steven Laureys)

It’s your brain, Laureys tells you

Laureys strongly disagrees. “There is no evidence there can be conscious experience without brain activity,” he said.

Lying in your hospital bed, you have become a true believer, and you are happier for it.

But your brain never died, the doctor tells you. You were in a coma. Perhaps your heart stopped for a while; maybe it didn’t. But that’s not even necessary to have an out-of-body experience.

“Many individuals having had NDEs were not physically in danger of death suggesting that the perception, on its own, of the risk of death seems to be important in eliciting NDEs,” the study said.

It’s enough just to think you’re dying to have one.

The American Psychological Association concurs. It defines near-death experiences as “profound psychological events with transcendental and mystical elements, typically occurring to individuals close to death or in situations of intense physical or emotional danger.”

In the case of coma patients, the brain producing the NDE may be functioning minimally, but it is still alive, Laureys hypothesized. He said one can stimulate certain parts of the brain to produce single elements of the experience.

It’s a vivid hallucination, Laureys’ report surmises. “It was a normal brain activity that produced their extraordinary perceptions.”

Though the results of his studies were marked and consistent, the Belgian research team has tested only a small number of patients so far.

And it has not been able to scan brain images of patients having NDEs to get hard data on the hypothesis of the physiological nature of the experience.

Laureys’ research alone is not enough. He wants to see more scientists get involved. As a doctor, he feels it’s the compassionate thing for them to do.

Too many people have the experience for serious researchers to ignore it, he said, and a lot of people are afraid that their consciousness will linger long after they pass away, making them witnesses to whatever happens to their bodies.

“The public is historically afraid to be buried alive,” Laureys said. “People are afraid to sign up as organ donors.” They are scared they may have to watch them being extracted from their bodies.

There are more than enough spiritual models for NDEs, he said — and superstitious ones. “There are a lot of crazy explanations out there.”

It’s high time for more hard science, Laureys said. A high percentage of his coma patients report having had NDEs, and he believes many of us go through these “afterlife” experiences when we die.

Laureys doesn’t want to speculate on the existence of heaven or hell, but he does say that only a small minority of near-death experiences are horrifying. Most of them are pleasant and uplifting.

From his accounts, it sounds like more people go to “heaven” than to “hell.”

CNN contributed to this story.