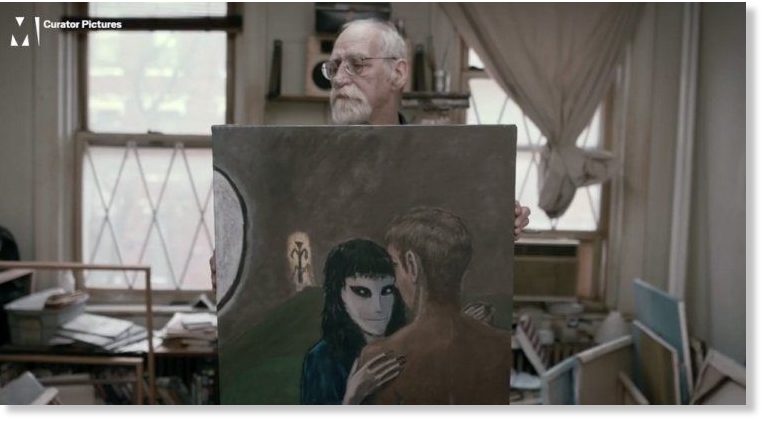 A man who claims he lost his virginity to an alien at the age of 17 shares some very interesting details of his ‘close encounters’ on Monday’s episode of This Morning. Speaking to co-host Phillip Schofield and Holly Willougby, David Huggins insists to have fathered hundreds of half-human babies after sleeping with a ‘busty’ alien named Crescent.

The man, who is 74-years-old, and lives in New York spoke to the ITV hosts via a live video link – and it is safe to say that Holly and Phil’s emotions showed on their faces.

David said he first met aliens when he was eight but that things took a steamy turn when he was 17 – and all events have inspired him to create artworks that show the contacts in graphic detail.

He claims he was in a woodland near the farm where he grew up when Crescent approached him and they had sex in the woods. ‘I think she wears a wig I’m not really sure, big black eyes and long black fingernails,’ he said. Phil asked: ‘Why do you think an alien would wear a wig?’ David believes that the aliens wear the wigs for ‘aesthetic reasons’.

Moving on to describe how he fathered alien babies, he said: ‘They’re all in glass cases stacked on top of each other.’ ‘So how come the aliens choose a guy who works in the deli counter in New Jersey to appear to?’ Phillip asked the man who appears in documentary Love and Saucers. ‘I was always there for a reason and I would do whatever they ask me to do,’ David answered.

Holly, who seemed very sceptical of David’s claims, wondered why he has not had any photographic evidence after decades of alien encounters. ‘Why not take a photo and then it’s proof?’ she demanded to which David replied that he may try so next time. Of course, viewers were not sold on David’s story with many amazed at how Holly and Phil managed not to laugh during the interview. Phil’s face is a picture, to say the least.

Advertisement. Scroll to continue reading.
In this article:alien sex

Exophilia: Would you have sex with an alien?

Now that many of the people who didn’t believe in the existence of aliens are more open to that possibility, the website jezebel.com asked...