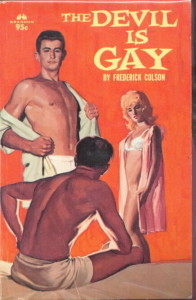 A bizarre and violent series of events at an Oklahoma City apartment involving Bible burning, blood, a “homosexual demon” and destruction, has landed a man behind bars.

According to Oklahoma City police, 22-year-old Jeremy Jarnell Anderson is being held at the Oklahoma County jail Thursday after a violent episode at his apartment on the 1400 block of S. Indiana Ave.

Officers said they were called to the Oklahoma City apartment Wednesday for a reported “person going ballistic.”

Officers said the caller mentioned a man whose face was bloody had kicked a heavy apartment door off its hinges, poured salt and soap all over himself and was breaking glass and other objects.