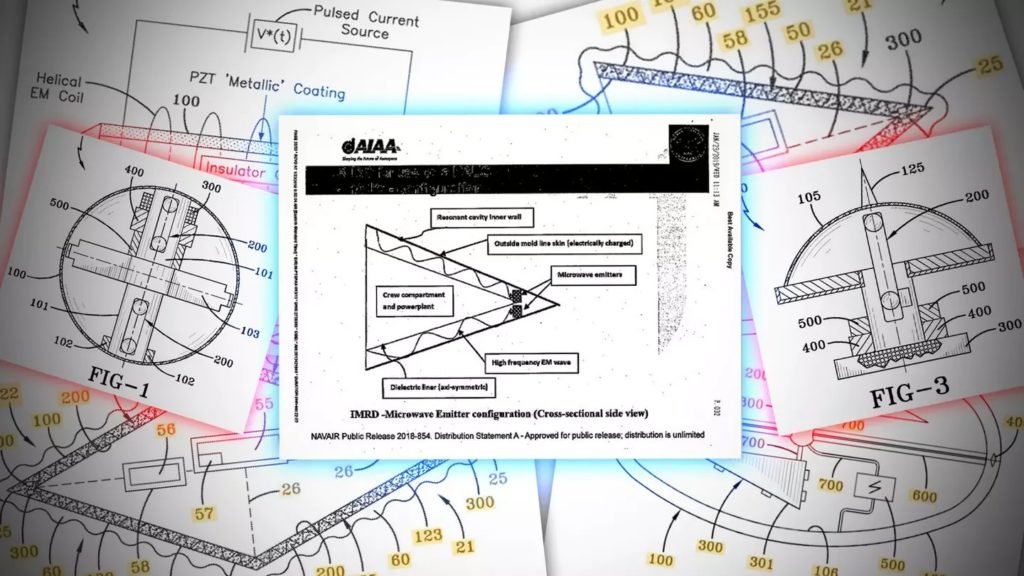 The engineer responsible for several exotic ‘UFO technology’ patents spoke to the media for the first time.

Among them, there was a ‘hybrid-underwater aerospace‘ capable of unmatched maneuverability in and out of water – something that looks a lot like the ‘Tic-Tac’ UFO chased by pilots during the infamous USS Nimitz incident in 2004.

Similar patents have also been filed for a ‘high frequency gravitational wave generator’, an ‘electromagnetic force field generator’ and even a ’spacecraft using an inertial mass reduction device’.

Then, in October 2019, it was revealed that the same engineer had patented a new type of nuclear fusion reactor compact and revolutionary.

Often seen as the Holy Grail of power generation, nuclear fusion is the same process that produces energy in the Sun and works by fusing hydrogen nuclei to create helium. Unlike nuclear fission that comes with the inherent risk of collapse, fusion is much cleaner and safer, while the hydrogen fuel used by the process is so abundant that it is virtually unlimited.

Now, finally, after many months of refusing to answer questions, the man behind these exotic patents – Salvatore Cezar Pais – has finally responded to emails sent through the website The War Zone.

Dr. Pais is certainly well qualified, having previously worked as an aerospace engineer in the Navy Naval Systems Command, before moving on to the Navy Strategic Systems Programs.

In an interview for the Drive, he emphasized that he was confident about the validity of his inventions.

The fact that my work on the design of a Compact Fusion Reactor has been accepted for publication in a prestigious magazine such as the IEEE TPS, should speak volumes about its importance and credibility – and should eliminate (or at least alleviate) all the misconceptions that you (or anyone else) can have regarding the veracity (or possibility) of my advanced physics concepts.

Who is Salvatore Caesar Pais?

Many began to wonder if Salvatore Caesar Pais was even real. Reporters found that Pais received a bachelor’s degree in 1990 and a master’s degree in 1993 in mechanical engineering. There is also evidence that he received a Ph.D. from Case-Western Reserve University in 1999.

Also, there is an image allegedly depicting Pais on a Chinese news blog that also covered patent history. The alleged image of Salvatore Pais, standing among the large Super Hornet and Growler models.

For many years, scientists have sought to create such superconductors, zero-resistance electrical circuits that generate powerful electromagnetic fields. Most superconductors require incredibly low temperatures, however, which makes them impractical for most applications outside of laboratories or other carefully controlled environments.

As Pais noted in his 2019 AIAA presentation, achieving room temperature superconductivity (RTSC) is a very disruptive technology that can completely change the paradigm in science and technology, and added that its military and commercial value is significant. Actually, one of the patents

Thedrive reporters spoke with Dr. Mark Gubrood, a physicist at the University of North Carolina, who holds a Ph.D. in ultra-low temperature and nanoscale experimental physics.

“In the past, I attended“ free energy ”and“ cold fusion ”conferences, and I came across very similar statements. The statement that he has developed or knows how to develop a room temperature superconductor is eternal; as well as statements based on some confusing physics to change space, inertial mass, or the laws of motion. Such things can be seen in meetings and publications, which are a crazy hobby industry, which is mainly associated with the vanity of its participants. “

“Pais’s patents would be considered by most physicists to be nonsense, but there will always be those who can believe it.”

“Pais uses pretty complicated babble to make this sound believable to those who know how real physics sounds, but he doesn’t understand much of it himself. Which probably applies to most patent experts, journalists and the Navy itself.”

If this is nonsense, why did the US Navy “cling to it” like that?

Despite months of research, it is still unclear why the fleet is fighting so fiercely for these patents.

If the U.S. Navy really managed to develop workable room temperature superconductors and electromagnetic force fields, these technologies would revolutionize the war in ways unknown before, not to mention the fact that they led to a paradigm shift in civilian technology. Nevertheless, the biggest question remains: if the fleet really possesses these technologies or thinks that they will become available in the near future, why publish patents?

Given all this, it is entirely possible that these patents are part of some ongoing information campaign aimed at sowing doubt among our opponents and even causing confusion among the American population.

For example, the United States and China are in a new technology arms race. Part of this race involves the production of misinformation to force the enemy to invest resources, both intelligence and research and development, which ultimately lead to a dead end.

In general, these patents certainly add only mystery to the increasingly complex narrative mosaic, which comes directly from the Navy, and which began just when a new era began, the so-called “competition of great powers.”

At the same time, perhaps this is an exciting attempt by the Pentagon to try to understand and imitate the mysterious and, it would seem, highly developed ships, which are supposedly increasingly seen near their own aircraft.

Also, it is worth considering that a breakthrough in a very exotic engine could still be made and that the fleet is ready to invest a lot of money in order to see their further progress. Or, nevertheless, this is a case of wasteful, erroneous, or even directly corrupt spending on ideas that have no real chance to pay off in the future.

The bottom line is that after several months of investigations, referring directly to the fleet and all those involved, it is not clear what the US Navy came up with. The existence of these patents and the main documentation that were revealed only made it all the more confusing.

“But we are not going to stop there”, the authors of the article finalize.

By the way, the device in the patent is very reminiscent of those same “flying triangles, because of which, for a decent time, ufologists are going crazy.

Does this mean that all of the patents mentioned will actually be served in the real world? Probably not, but if one of them does, it will certainly be interesting to see it in action.