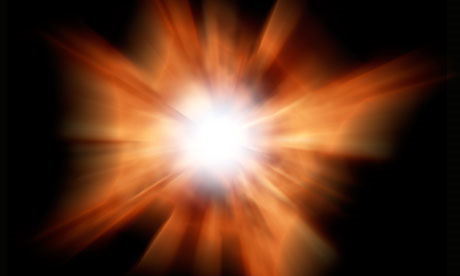 Scientists have promised a groundbreaking announcement pertaining to the birth of the universe.

There is intense speculation among cosmologists that a US team is on the verge of confirming they have detected “primordial gravitational waves” – an echo of the big bang in which the universe came into existence 14bn years ago.

Rumours have been rife in the physics community about an announcement due on Monday from the Harvard-Smithsonian Center for Astrophysics. If there is evidence for gravitational waves, it would be a landmark discovery that would change the face of cosmology and particle physics.

Gravitational waves are the last untested prediction of Albert Einstein’s General Theory of Relativity. They are minuscule ripples in the fabric of the universe that carry energy across space, somewhat similar to waves crossing an ocean. Convincing evidence of their discovery would almost certainly lead to a Nobel prize.

“If they do announce primordial gravitational waves on Monday, I will take a huge amount of convincing,” said Hiranya Peiris, a cosmologist from University College London. “But if they do have a robust detection … Jesus, wow! I’ll be taking next week off.”

The discovery of gravitational waves from the big bang would offer scientists their first glimpse of how the universe was born.

The signal is rumoured to have been found by a specialised telescope called Bicep (Background Imaging of Cosmic Extragalactic Polarization) at the south pole. It scans the sky at microwave frequencies, where it picks up the fossil energy from the big bang.

For decades, cosmologists have thought that the signature of primordial gravitational waves could be imprinted on this radiation. “It’s been called the Holy Grail of cosmology,” says Peiris, “It would be a real major, major, major discovery.”

Martin Hendry at the University of Glasgow works on several projects designed to directly detect gravitational waves. “If Bicep have made a detection,” he says, “it’s clear that this new window on the universe is really opening up.”

According to theory, the primordial gravitational waves will tell us about the first, infinitessimal moment of the universe’s history. Cosmologists believe that 10-34 seconds after the big bang (a decimal point followed by 33 zeros and a one) the universe was driven to expand hugely.

Known as inflation, the theory was dreamed up to explain why the universe is so remarkably uniform from place to place. But it has always lacked some credibility because no one can find a convincing physical explanation for why it happened.

Now researchers may be forced to redouble their efforts. “The primordial gravitational waves have long been thought to be the smoking gun of inflation. It’s as close to a proof of that theory as you are going to get,” says Peiris. This is because cosmologists believe only inflation can amplify the primordial gravitational waves into a detectable signal.

“If a detection has been made, it is extraordinarily exciting. This is the real big tick-box that we have been waiting for. It will tell us something incredibly fundamental about what was happening when the universe was 10-34 seconds old,” said Prof Andrew Jaffe, a cosmologist from Imperial College, London, who works on another telescope involved in the search called Polarbear.

But extracting that signal is fearsomely tricky. The microwaves that carry it must cross the whole universe before arriving at Earth. During the journey, they are distorted by intervening clusters of galaxies.

“It’s like looking at the universe through bubbled glass,” said Duncan Hanson of McGill University in Montreal, Canada, who works on the South Pole Telescope, a rival that sits next to Bicep.

He said the distortion must be removed in a convincing way before anyone can claim to have made the detection. The prize for doing that, however, would be the pinnacle of a scientific career. “The Nobel Prize would be for the detection of the primordial gravitational waves.”

“Yeah, I would give them a prize,” said Jaffe.

The announcement will be made on Monday at 4pm GMT.

In this article:Big bang, universe