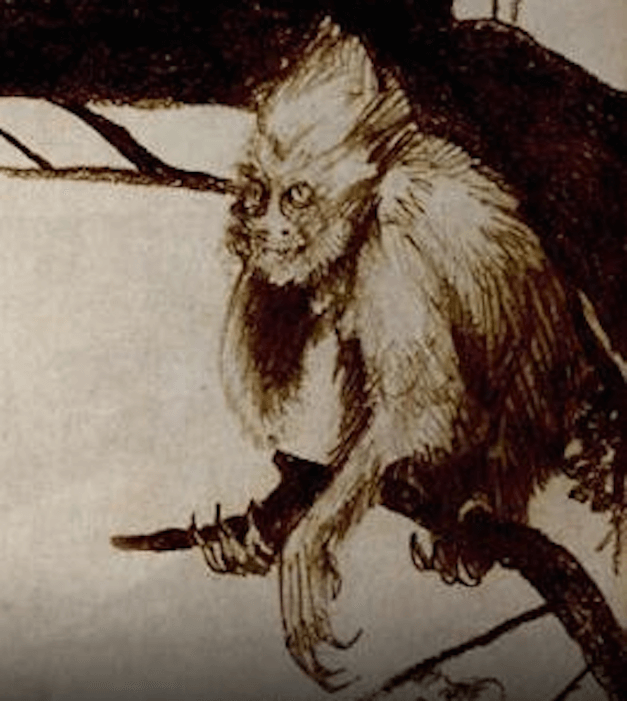 There are plenty of reports of enormous hairy hominids from all over the world, and indeed they seem to be a phenomenon that spans across cultures. Yet equally as curious and bizarre are the stories of smaller, miniature versions of these man-like beasts. One place that has long has a tradition of curious little forest people is the island nation of Madagascar, which is a majestic land full of spectacular mysteries both known and unknown.

Located in the Indian Ocean off the coast of East Africa lies the island nation of Madagascar, or officially the Republic of Madagascar. The main island is the fourth largest island in the world, and broke off from the Indian peninsula approximately 88 million years ago, after which the flora and fauna went on to evolve in complete isolation. It is due to this unique geological history that the island has a wealthy abundance of completely unique species and ecosystems seen nowhere else on Earth, with many more thought to remain undocumented. Considering this remote isolation, the swaths of pristine, uncharted wilderness, such a plethora of unique wildlife, and the strong possibility of lost, unidentified species, it should come as no surprise that Madagascar also has its share of bizarre and elusive mystery monsters.

One of the more intriguing of Madagascar’s alleged strange denizens is a creature most commonly known as the Kalanoro, which is said to roam isolated pockets of rain forest and lurk in dark caverns all over the country. Known by a myriad of other names depending on the local tribe, such as the Kotoky or Vazimba, these odd beings are said to stand around 2 feet in height, with somewhat ape-like features and hooked fingers endowed with extremely long fingernails. They are mostly said to be covered in long hair, although it is often said that they also have some sort of quills or spines on their backs, and the eyes are typically said to be formidable and fierce. The creatures are often reported as loving water, and can supposedly be seen cavorting about in rivers or lakes. More unusual details include that they have only three toes that face backwards or that their eyes glow in the dark.

The Kalanoro are said to be for the most part shy and hiding from mankind, but will come forth under the cover of night to steal food from villages and even on occasion abduct children, and they are known to be rather aggressive if encountered. They are most often described as having prodigious strength for their size, and it is usually recommended to avoid them if at all possible, although sightings are remarkably rare. Interestingly, most of the lore and descriptions of the Kalanoro are remarkably consistent amongst the myriad tribes scattered about Madagascar, which prompted the great cryptozoologist Bernard Heuvelmans to once muse, “These legends may be fantastic, but they are found all over Madagascar, and it would be odd if they were utterly without foundation.” Indeed, far from just a completely folkloric legend there have been a few supposed sightings and encounters with the diminutive beasts on occasion. Some interesting early reports were written of in 1886 by a G. Herbert Smith within the pages of the Antananarivo Annual, where he said:

We next come to the forest, and from there we get endless stories of the Kalanoro, a sort of wild-man-of-the-woods, represented as very short of stature, covered with hair, with flowing beard, in the case of the male, and with an amiable weakness for the warmth of a fire. An eye-witness related that once, when spending a night in the heart of the forest, he lay awake watching the fire, which had died down to red embers, when suddenly he became aware of a figure answering to the above description warming himself at the fire, and apparently enjoying it immensely. According to his story, he put a summary end to the gentleman’s enjoyment by stealing down his hand, grasping a stick, and sending a shower of red-hot embers on to his unclothed visitor, who immediately, and most naturally, fled with a shriek. Another tells how, on a similar occasion, the male appeared first, and after inspecting the premises and finding, as well as a fire, some rice left in the pot, summoned his better half; the pair squatted in front of the fire and – touching picture of conjugal affection – proceeded to feed one another!

One must confess that the creature described looks suspiciously like one of the larger sorts of lemur; but in a village near Mahanoro, and on the verge of the forest, the inhabitants say that very frequently these wild people come foraging in their houses for remnants of food, and may be heard calling to one another in the street.

Read the rest of the article here.

Advertisement. Scroll to continue reading.
In this article:Kalanoro, Kotoky, Vazimba