This seismic event has become the second strongest in the history of the state. The first place is occupied by an earthquake in the same area, on October 28, 1983, the magnitude of which was 6.9 points. At the moment, information about the victims and damages is only being collected, but all this is not the main thing. The main thing here is different:

Felt the earthquake from Idaho in Kelowna, BC! #earthquake pic.twitter.com/PukmQVi60A The Challis Arc is a volcanic field with a length of about 1,500 kilometers, the origin of which is not very clear. It is assumed that the field appeared as a result of subduction of the ancient Kula / Farallon plate under North America: 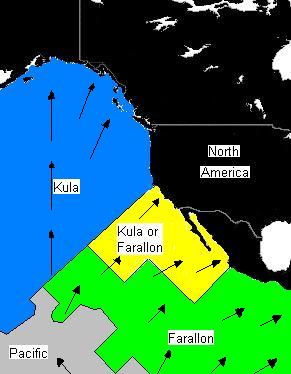 The ancient plate partly sank, displacing magma, which, in turn, climbed out of volcanoes. The partly remains of Kula / Farallon were absorbed into the base of North America. All together, this led to the appearance of corrugated belts along the west coast. One of these belts is called the Challis Arc: Thus, the epicenter was somewhere in a zone of very deep subduction and the earthquake mechanism there looks something like this: That is why the earthquake was felt in Canada, that is, along the Challis Arc, but it did not spread a thousand kilometers to the West, East and South.

For some reason, fragments of these plates intensified: maybe they started to sink again, maybe they decided to float – we don’t know this. But we know that according to one theory, Yellowstone was the result of flooding / melting of fragments of the Farallon plate. The same goes for the Cascade Mountains. Therefore, if the Farallon plate suddenly became active – now we need to wait for major news from the Rainier volcano or even from the world-famous caldera!

In this article:Challis Arc, featured, Yellowstone