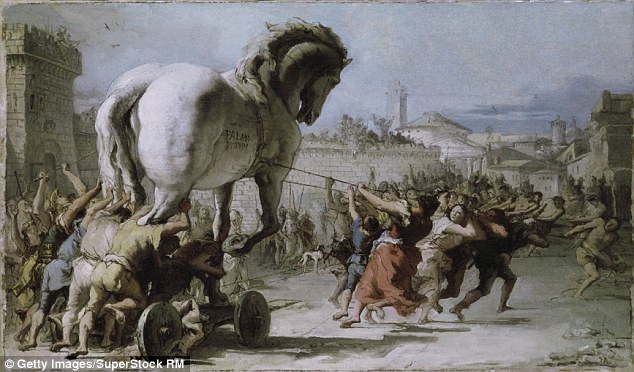 ‘Sea People’ were a purported seafaring confederation of groups known to have attacked ancient Egypt prior to the Late Bronze Age collapse. Following the creation of the concept in the nineteenth century, it became one of the most famous chapters of Egyptian history, given its connection with, in the words of Wilhelm Max Müller: “the most important questions of ethnography and the primitive history of classic nations”.

The various Sea Peoples have been proposed to have originated either from western Anatolia or from Southern Europe. Although the archaeological inscriptions do not include reference to a migration, the Sea Peoples are conjectured to have sailed around the eastern Mediterranean and invaded Anatolia, Syria, Canaan, Cyprus, and Egypt toward the end of the Bronze Age.

The Trojan War was a grander event than even Homer would have us believe. The famous conflict may have been one of the final acts in what one archaeologist has controversially dubbed “World War Zero” – an event he claims brought the eastern Mediterranean Bronze Age world crashing down 3200 years ago. And the catalyst for the war? A mysterious and arguably powerful civilization almost entirely overlooked by archaeologists: the Luwians.


By the second millennium BC, civilization had taken hold throughout the eastern Mediterranean. The Egyptian New Kingdom coexisted with the Hittites of central Anatolia and the Mycenaean of mainland Greece, among others.

In little more than a single generation, they had all collapsed. Was the culprit climate change? Some sort of earthquake storm? Social unrest? Archaeologists can’t seem to agree.

Eberhard Zangger, head of international non-profit, Luwian Studies, based in Zurich, Switzerland, says that’s because one crucial piece of the puzzle is missing. Another powerful civilization in western Anatolia played a crucial role in the downfall.

This theory is believed to be backed up by ancient Egyptian texts which describe attacks on Cyprus and Syria by the mysterious ‘Sea Peoples’. Researchers conclude that this enigmatic civilization is in fact the ancient Luwian.

Raiders set fires to temples and buildings, driving the ruling class out until the Hittite civilization ‘vanished into oblivion for three thousand years,’ according to the new theory.

YET THE LUWIANS HAVE REMAINED COMPLETELY UNKNOWN ARCHAEOLOGICALLY. THEY DO NOT APPEAR ON ANY POLITICAL MAP OF THE AEGEAN BRONZE AGE, AND THERE ARE STILL VIRTUALLY NO PREHISTORIANS WHO WOULD SAY PUBLICLY THAT THE LUWIANS EVER WIELDED ECONOMIC AND POLITICAL POWER.

It was previously believed that the Luwians had no “economic or political power” and that they were too far dispersed among minor kingdoms to pose a threat. In fact, it was believed previously that Luwian territory was inhabited only by nomadic “horse people” who had no political power.

The archaeologists studying the Luwian people note that the inclusion of the Luwians into the Bronze Age battles is the only model that aligns fully with excavation results, written documentation, and traditions. While not all archaeologists are in agreement that the Luwians are the mysterious “Sea Peoples,” many are supporting the idea that more research needs to be done in the long-neglected western Anatolia. Christoph Bachhuber, a professor at Oxford, says that he is excited to see the research as it will bring more attention to the western Anatolia and potentially provide the ability for an overall better understanding of the area and ancient civilizations that lived there.

In this article:Sea People, Trojan War