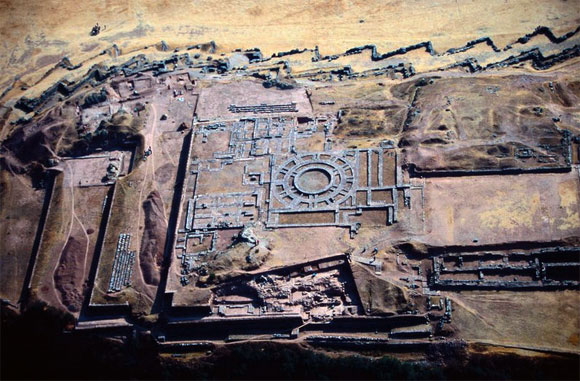 Vilcabamba area – archaeologists have no clue who made this or when. Note: Read fragment of Arthur Posnansky book “Tihuanacu – The Cradle of American Man”  we added to this post.

“The ruins of Tiahuanuco have been regarded by all students of American antiquities as in many respects the most interesting and important, and at the same time most enigmatical, of any on the continent. They have excited the admiration and wonder alike of the earliest and latest travelers, most of whom, vanquished in their attempts to penetrate the mystery of their origin, have been content to assign them an antiquity beyond that of the other monuments of America, and to regard them as the solitary remains of a civilization that disappeared before that of the Incas began, and contemporaneous with that of Egypt and the East.

Unique, yet perfect in type and harmonious in style, they appear to be the work of a people who were thorough masters of an architecture which had no infancy, passed through no period of growth, and of which we find no other examples. Tradition, which mumbles more or less intelligibly of the origin of many other American monuments, is dumb concerning these. The wondering Indians told the first Spaniards that “they existed before the sun shone in the heavens,” that they were raised by giants, or that they were the remains of an impious people whom an angry Deity had converted into stone because they had refused hospitality to his viceregent and messenger. “  – E. George Squier Hikers In Peru Noticed Something Strange Hidden Away On This Cliff Face. What The…

Ever wish you were an adventurer, or an explorer, discovering environs and relics unseen by human eyes for centuries? It’s certainly a fantasy I...