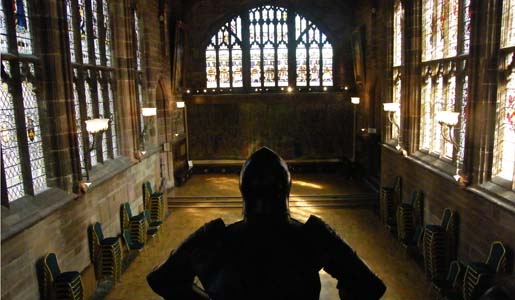 Telegraph photographer Joe Bailey had quite a shock when he went though his pictures taken at today’s Irish President visit to Coventry.

For in those images he found a ghoulish green ‘ghost’ hanging out behind Michael D Higgins when the leader was addressing the city’s Medieval Guildhall.

The emerald ethereal apparition seemingly goes unnoticed by the gathered great and the good – who are all listening intently to the President’s speech.

A shaken Joe said: “I was a little taken aback to say the least. Some in the office are convinced it’s a ghost but I’m not so sure.

“However, I am surprised I didn’t spot it at the time. So who knows?”

St Mary’s Guildhall once held Mary, Queen of Scots prisoner within its walls and has always had a reputation for being haunted.

Regular sightings include a ‘grey lady’, a little girl and a monk.

St Mary’s has a room known as the ‘drapers room’ which is rumoured to be very emotional, with many people being overcome with a feeling of sadness and some even bursting into tears for no reason.

The building was built on part of the site of the former Coventry castle and is considered to be the finest Medieval Guildhall in the country.

The most famous city Guildhall ghost photo was also taken at a civic event almost 30 years ago, when a hooded monk appeared during a meeting of the Coventry Freemans.