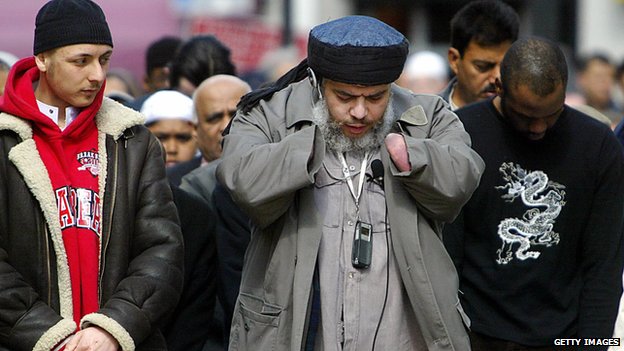 (globalresearch) Evidence produced in a New York courtroom by a London-based ‘Islamist hate preacher’ last week is yet more grist to the mill that the notorious Abu Hamza was indeed an agent of Britain’s counterintelligence service, MI5.

Convenient too for the British establishment that the trial was ‘outsourced,’ taking place three thousand miles across the Atlantic where MI5’s culpability will not be under scrutiny.

As Hamza’s lawyer, Joshua Dratel, waved the Scotland Yard documents proving the cleric was an MI5 “intermediary,” he was reminding the court of MI5 ‘grooming’ of Hamza going back to 1997, well before the 9/11 attacks or the so-called War On Terror. By 2000 London’s Finsbury Park Mosque trustee, Mufti Abdul Barkatulla, was pleading with Scotland Yard to curb the cleric’s activities as London’s cheerleader for Osama Bin Laden, but MI5 demurred; they saw the Islamist as a useful ‘intelligence honeypot’ to watch.

To Her Majesty’s Secret Service he was the opportunity they had been waiting for. Instead of reining Hamza in, MI5 sent agent Reda Hassaine and others in to secretly join Hamza’s group of Al-Muhajiroun ‘angry young men.’ They looked on for years as Hamza’s distorted version of Islam gathered scores of impressionable recruits, making regular trips to terrorist training camps in Afghanistan.

The question of whether this constitutes MI5 knowingly aiding and abetting terrorism under the Terrorism Act, or merely criminal negligence is yet to be tested in the British courts. Whether or not these latest claims are successful in New York, it is quite clear that with a light dusting of chalk powder the fingerprints of Britain’s intelligence agencies, the Security Service (MI5) and the Secret Intelligence Service (MI6) are likely to be found at the scenes of all the post 9/11 terror attacks in the UK.

Although it has for much of the population, the penny doesn’t seem to have dropped yet for the London press that, much like the Jews were tried and convicted by Nazi propaganda back in the 1930s, the Islamic community may be being fitted up in a TV news script written by these unaccountable rogue intelligence agencies. No spooks haunting our places of worship is nothing new. Elements within the Vatican pulled out all the stops in the desperate spring of 1945 with Hitler’s SS, running Jesuit ‘Ratlines’ to help thousands of senior Nazis to escape justice. This accusation was treated as a conspiracy theory immediately after the war, but is becoming better understood as intelligence papers are declassified and protagonists who always planned to get off ‘Scot free’ go to their grave.

Ladislas Farago’s ‘Aftermath’ (1974), Paul Manning’s ‘Martin Bormann Nazi In Exile‘ (1981) and Tom Bower’s ‘The Paperclip Conspiracy’ (1981) all document the horrifying success of the transportation and transition of a sizeable army of Nazi war criminals into anti-Soviet America: From the mess room to the board room, from the jackbooted to the suited.
With the Ratlines’ success, the US Office for Strategic Services (OSS) and post-war Central Intelligence Agency (CIA) appear to have picked up this penchant for an ‘intelligence priesthood.’ One decisive factor may have been America’s first CIA chief Allen Dulles’ law firm, Sullivan & Cromwell, that laundered much of the Nazis’ looted wealth of Europe brought to New York from burrows squirreled away in Argentina and elsewhere.

Many believe it was the Dulles CIA regime’s first experiment in religion since the war, when a captivating fellow, the ‘reverend’ Jim Jones, founded his People’s Temple church in 1955 in Los Angeles. Sporting his characteristic ‘shades’, the pastor courted the press and controversy, growing his network of mainly Californian mission halls to a congregation of around five thousand and buying a plot of land known as ‘Jonestown’ in Guyana, South America. It was there that the cult hit world headlines on Saturday November 18, 1978 with horrific events triggered by the visit of a politician already well-known for his outspoken criticism of the CIA, Democratic Congressman for California, Leo Ryan. As Ryan was leaving with several members of the cult who wished to return to the US, Jones’ guards opened fire, killing the congressman, three journalists and one member of the fleeing congregation. Later that day, nearly one thousand Jim Jones followers were found dead at ‘Jonestown’ having been tricked into or persuaded to drink poison.

The most detailed and shocking accounts of life in the ‘People’s Temple’ of Jim Jones is Jeannie Mills’ 1979 book ‘Six Years With God’. She, husband Al, and her four children became caught up in the cult but she left and began to work against it, even setting up a home for former cult members. But within a year of the Jonestown massacre, shortly after the book was published, Jeannie, Al and daughter Daphene were horrifically executed in their San Francisco home.

It has since been shown by author Peter Levenda and others that Reverend Jim Jones was secretly meeting with CIA figures: South American torture training staffer, Dan Mitrione, to name but one. Mitrione was himself kidnapped and killed in 1970 for his part in the CIA’s South American torture program by Tupamaros guerrillas in Uruguay.

On Wednesday 22nd May 2013, Royal Fusiliers’ drummer Lee Rigby was hacked to death on the streets of South London. It later transpired that MI5 had travelled to Kenya back in November 2010 to release one of his murderers from jail, Islam convert Michael Adebolajo, hoping to recruit him. MI5 had told them not to worry and that Adebolajo was ‘no danger.’

Intelligence services use several methods to persuade or bully individuals to work for them. The more poverty and destitution in a country, the lass basic human rights like food and shelter are guaranteed the easier it becomes for the spooks to recruit. According to former MI5 officer Annie Machon, MI5 use the mnemonic ‘MICE’ to describe their main recruitment methods: Money, Ideology, Compromise, which is a polite word for blackmail, and Ego.

Kenya anti-terror boss, Elijah Rop, told London’s Daily Mirror in December 2013, “The British must answer many questions. We told them this man [Adebolajo] was a danger. We warned them.”

MI5 and Scotland Yard’s anti-terror police initially tried to cover-up the fact that Adebolajo’s was brought to Britain by MI5 by arresting one of his boyhood friends who was talking to journalists. Unfortunately for them, Abu Nusaybah beat them to the BBC Newsnight studios and was only arrested after the horse had bolted, and he had finished his national TV interview.

Kenya’s Elijah Rop is right. Senior MI5 officers, who gave the order for Drummer Rigby’s killer to be sprung from jail and brought to Britain, have some very serious questions to answer. Unfortunately for the murdered Fusilier’s friends and family, the present Intelligence and Security Committee chairman, former Tory Defense Secretary Sir Malcolm Rifkind, is too chummy with MI5 and the defense industry which pays him, to do any rigorous investigating. A banner and photographs of murdered soldier Lee Rigby are displayed during a protest outside the Old Bailey courthouse in London February 26, 2014 (Reuters / Toby Melville)

Back in 2003 at Finsbury Park Mosque, Abu Hamza and his sidekick Haroon Aswat were like Tweedledum and Tweedledee, always seen together, holding the same ideology: Hamza was the voice and Aswat was the fixer as the Mosque council begged the police to intervene… but was MI5 watching them, or running them?

Haroon Aswat was alleged to have been in touch with all four of the alleged 7/7 bombers, Mohammad Sidique Khan, Shehzad Tanweer, Germaine Lindsay and Hasib Hussain in the days before the 2005 London bombings, but was out of the country by the time the bombs went off; he had hopped on a plane to India early that early that morning.

Aswat was arrested a few days later in Pakistan, then inexplicably released and made his way to Zambia where he was jailed and finally extradited, ending up in custody in Britain and to this day remains confined indefinitely in a psychiatric hospital.

Former FBI Special Prosecutor John Loftus alleged on TV in late July 2005 that he believed Aswat was an MI6 ‘double agent’. Though the activities around their Al-Muhajiroun group were to frame Britain’s entire domestic policy in the so-called War On Terror, Abu Hamza’s fixer, Haroon Aswat, has almost disappeared from history.

The pressure MI5 and their media associates can bring to bear when it comes to controlling the media narrative of terror attacks like 7/7 is mind-boggling. This extends well beyond issuing denials on the day of an attack against stories that don’t ‘fit the script’, hatchet job ‘Conspiracy Files’ documentaries, or ordering the arrest of individuals who are about to implicate them on live TV.

When, in 2006, author of ‘The London Bombings, an Independent Enquiry’, Nafeez Ahmed, was negotiating with his publisher the deal began to stall because of his use of the term ‘alleged bombers.’Ahmed was mindful that the men may have been patsies rather than masterminding the attack themselves. The publisher insisted the term ‘alleged’ be removed throughout the text, strange when you think how the removal of that one word might prejudice subsequent inquests or public enquiries.

Approaches from the spooks come in many forms, usually deniable. Though they will try to lie their way out that can be made more difficult. Switched on activists may even find it possible to whip out their mobile phone and film the officer trying to recruit them before they slip away. As ‘Emma’ did this January in the run up to this September’s NATO summit in Newport, South Wales.

So if you are approached by a dodgy spook or cleric, consider carefully whether you have the confidence to go to the press but meanwhile draw up a short sharp statement of fact, an affidavit, and, if appropriate take it straight to your local civil police.

Just like the Nazi Jesuits of Operation Paperclip, MI5 and the CIA mullah’s days are numbered because we the people are wising up. Religious posts enjoying the highest levels of public trust have been the haunt of pedophiles for too many years, but honest rabbis, vicars, priests and mullahs are realizing how important it is to flush out all the fakers, even the government approved ones, from our places of worship.

Beginning his working life in the aviation industry and trained by the BBC, Tony Gosling is a British land rights activist, historian & investigative radio journalist.