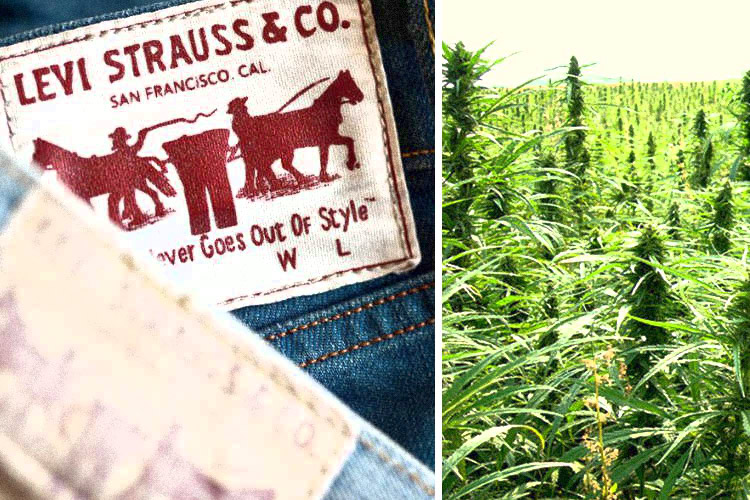 December marked a historic moment in the United States with the hemp legalization. No wonder the industry is now flourishing. It has been estimated that the industry might go up and stand at a value of about $13.03 billion by the year 2026. You might have already come across hemp-derived products in the market, but now Levi Strauss & Co. is capturing a part of the fashion world by using hemp for sustainable clothing.

Levi’s is a denim icon and many people will swear by its name. But to keep up with its goodwill, as well as do something for our planet, Levi’s is going for sustainable clothing. While you might think that cotton is a harmless product, the water requirement of cotton is huge, almost 2,655 liters of fresh water, just for cultivation. With processing and finally using it in garments, it takes about 3,781 liters of fresh water. These are data that has been collected from the Stockholm Environmental Institute. Using alternatives like hemp can cut down the water use by 2/3rd.

So, in March, Levi’s collaborated with the Outerknown label, to introduce a jacket and a pair of jeans made out of 69% cotton and 31% hemp blend which gives the pure cotton fuel. The cannabis plant uses a lot less chemicals and water than cotton but is a bit difficult to manage too. While cotton is derived from the puffy bud found on top of the plant, indicating its softness, hemp fibers are taken from the trunk. It’s coarse and stiff, according to Paul Dillinger, the head of Levi’s global product innovation. It can be converted into a sturdy rope easily but for clothes – it just doesn’t seem like the ideal material.

But Levi’s knows how to mix and match ideas and come up with a working solution. Dillinger observed the growth trajectory of cotton demand and compared it with the fresh water requirement in both cotton processing and cultivation. It was pretty apparent that alternatives had to be found. Hemp was not in his mind, until the company discovered a cutting-edge research that was being conducted in Europe in places where hemp was legalized. Details of the breakthrough or the partners involved were not revealed by the company but within three years, the final product was in their hands, ready to be integrated into their clothing.

If cottonized-hemp can be integrated completely with the products of the industry, it can make way for a revolution. But Dillinger does not want people to get their hopes too high for now. This process is still in a novice state, and overnight revolution will not be possible. More research should be conducted before a shift can be made. It’s more likely that hemp will become another natural cotton alternative rather than a replacement of the versatile cotton.

Dillinger does not believe it will be a fad either. Generally, when people go for a sustainable product, they have to sacrifice some quality which the non-sustainable product boasted of. Oftentimes, they would make that sacrifice out of ‘choice’ or because it’s ‘cute’. But for cottonized-hemp, such a sacrifice would be unnecessary. According to Dillinger, customers won’t be able to spot a proper difference from pure cotton. Once proper research is done, he believes that within 5 years, such a product and the revolution is possible.

If it really turns out the way Dillinger hopes it would, we can save up a lot of freshwater. With the planet’s depleting resources requiring rapid preservation, this can be a massive development. Kudos to Levi’s, if they can make this work.

*This article (Levi’s Is Using Hemp In Their New Line Of Sustainable Clothing) was originally posted at Truth Theory and is re-posted here with permission.**

In this article:hemp legalization, Levi’s