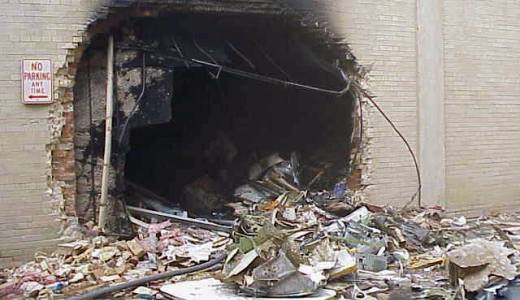 Suppressed video released 10 years after 9/11 attacks in the United States clearly shows the Pentagon attack was a Cruise type missile, either a Tomahawk or Russian/Soviet Granit as described by former officer of the Soviet nuclear intelligence Dimitri Khalezov.

The little explosions which have been circled in the video clearly point out that “there is no huge jet” hammering into the Pentagon, Khalezov explains.

According to the official U.S. government narration, an American Airline Boeing 757 struck the Pentagon on September 11, 2001.

The author of “The third truth about September 11 say:

Every time he uploads such videos on the internet “my YouTube gets deleted or the hits go down.”

He describes a hole that appeared in a Pentagon wall right after the attack.

“Look at that little hole. No way a jet [can] fit in there. Where’s the wings? Where’s the engines?”

“the explosion happens before the ‘jet’ even appears.”

After 11 September 2001, Khalezov undertook extensive research on the collapse of the three World Trade Center Towers. The research is claimed to demonstrate that the three towers were demolished by three underground thermo-nuclear explosions.

Moreover, Khalezov claims that he knew about the in-built so-called “emergency nuclear demolitions scheme” for the Twin Towers as long ago as the 1980′s, while a serviceman in the Soviet Special Control Service.