“I am a law enforcement officer for a police agency in Florida. While I was dispatched to a call 10/4/19 at 117 am in regards to a suspicious person, upon arrival I noticed a completely black triangular-shaped craft with no lights about 40 feet above the ground traveling about 35 mph in a southerly direction.

The craft had no sound. as the craft came into the line of sight of my cruiser it passed behind some trees and I saw a clearing of trees ahead and it was going in that direction. I shined my spotlight and illuminated part of the craft as it passed between the trees.

The craft continued on and I had arrived on the scene of a call so I could not follow. later after finishing the call, I reviewed the dashcam video of the time I arrived and saw the object.

The video cameras record constantly and are save temporarily to a cache. unless selected they are dumped and not saved to the hard drive. After reviewing the video I could see the incident and part of the craft as it passed between the trees on film.

I recorded the playback on my phone from the in-car camera of the cruiser. The upper left corner is a rectangular blur that had my personal identification number and I removed it for anonymity.”

Advertisement. Scroll to continue reading.
In this article:Florida, triangular UFO 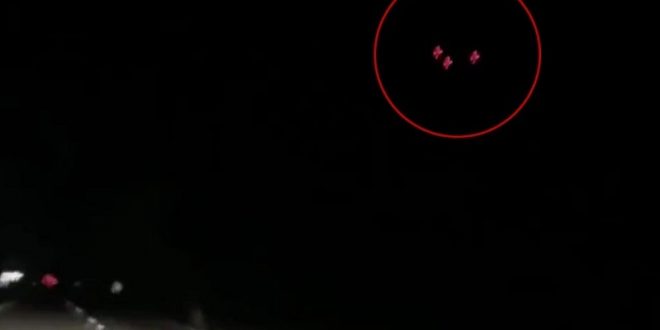 Black and red UFO is spotted and terrifies driver in Nashville

SPOOKY footage shows a blank triangular UFO with red flashing lights hovering over a car as the terrified driver can be heard bursting into...