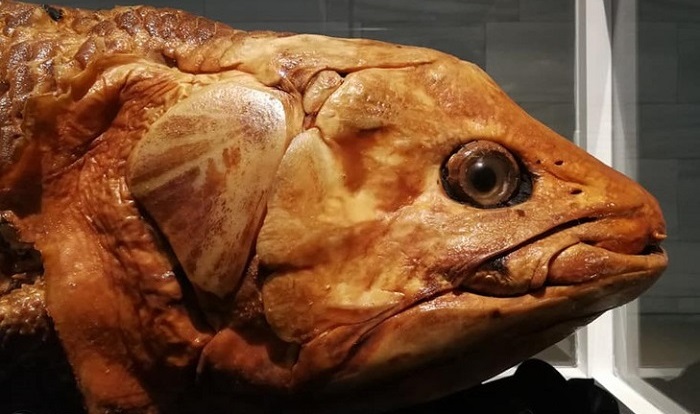 The unique fish Latimeria chalumnae, also called “Coelacanth”, lived on our planet long before the dinosaurs. They were long thought to have disappeared around the same time, about 65 million years ago.

However, after 1938, when the first Latimeria was officially discovered by chance, it turns out that the Latimerians did not die, but live in the deep waters off the east and south coasts of Africa.

Later, a second type of Latimeria was discovered in Indonesia.

The oldest fossils of Latimeria are 360 ​​million years old, and the “freshest” are 80 million years old. At the same time, it should be known that there were a huge number of Latimerians, at least 90 different species. They have been distributed worldwide, in sea and fresh waters.

Latimeria stand out against the modern fishes with their unusual fins, more like limbs, and a wedge-shaped tail. Their bodies are covered with solid scales, similar to armor.

Latimeria are pretty big fish. They can reach up to 2 meters in length and weigh up to 90 kg. At the same time, the fact that no one has found them for so long is amazing.

Even after this species has been officially recognized as being extant, the Latimeria is still rare and can only be found through specific monitoring in the waters where it has been observed.

Latimeria swim slowly and feed on cephalopods and deep-sea fishes. Often, they were discovered in groups in underwater caves. They live to about 48 years. Females give birth to live individuals after a long pregnancy of 13 months.

The history of the Coelacanth is the cornerstone that supports the belief of many cryptozoologists that the mysterious Yeti, sea monsters, Chupacabra and other cryptids, actually exist, but simply have not yet been found.

At least two species of Latimeria, and perhaps more, have survived to this day without hiding at all. In addition, as mentioned above, Latimeria’s “freshest” fossils date back to 80 million years.

Just imagine this huge period of time during which archeologists have not found a single skeleton of Latimeria, even though they existed all this time.

According to some reports, there are populations of 300-400 individuals near the coasts of Africa and Indonesia. This comes after several years of increased illegal fishing. In the 1980s, the Latimerians were hunted (supposedly) because of the healing properties of their meat, and before that there were probably several thousand of them.

But if they were initially much smaller, they would probably never have been discovered at all, still considered extinct.

And the rare stories of local fishermen about “fish with a foot and a shell ” would be considered the same fiction as the stories of Africans about living dinosaurs.