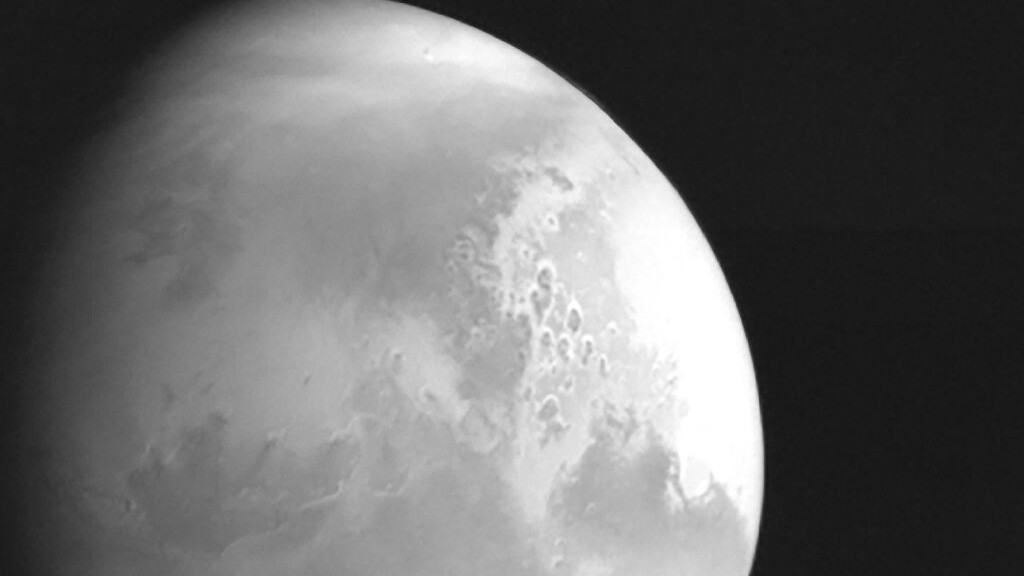 China’s Change 4 spacecraft returned to service on the 27th lunar day on the far side of the moon, but scientists were thrilled by the discoveries made on the previous lunar day of the mission.

The Change 4 lander and the Yutu-2 rover resumed operations on February 6 after hibernating during a cold moonlit night, according to Chinese state media outlet Xinhua. But one lunar day earlier, the rover came across a curious rock specimen that the Yutu-2 pilot team began to call a “milestone.”

According to Yutu Diary 2, published by China’s news channel affiliated with China’s National Space Administration (CNSA), the mission scientists agreed with the team of drivers that the oblong stone deserves a closer look.

The team then planned to carefully approach and analyze the rock with the Yutu 2s Visible and Near-Infrared Imaging Spectrometer (VNIS), which captures light that scatters or reflects off materials to reveal their composition.

VNIS has been used to investigate a number of rocks and regolith samples along the Utu 2 path through Von Karman crater. These include unusual specimens of molten glass and possibly lunar mantle material.

The find did not look particularly exciting to the untrained eye, but it sparked interest among lunar scientists.

“It seems to be in the shape of a shard and sticking out of the ground. It’s definitely unusual, ”Dan Moriarty said, a NASA program scientist at the Goddard Space Flight Center in Greenbelt, Maryland.

“Repetitive impacts, heat cycle stresses and other forms of weathering on the lunar surface can cause rocks to break down to more or less ‘spherical’ shapes if given enough time,” Moriarty said.

“Think about how rocky beaches turn rocks into smooth, circular shapes over time due to the repeated impact of the waves.”

Moriarty said both the shard-like shape and the pronounced ridge that runs along the edge of the rock seem to indicate that it is a geologically young rock and has arrived relatively recently.

“I would definitely guess its origin as an impact release from some nearby crater. It is possible that rock with this aspect ratio could have been formed by a process known as shearing, when some of the rock fragments are ejected from the nearby surface without being subjected to a strong impact pressure as the immediate target of the strike,” Moriarty said, adding that this initial estimate is only speculation.

Subsequent research on VNIS will provide a much deeper understanding. Clive Neal, a leading lunar expert at the University of Notre Dame, agrees that the images appear to represent the samples as impact discharges and not outcropped bedrocks.

“My question is, are they of local origin? Hopefully, the spectral data will allow us to assess the origin of the material – local or outside, that is, from outside this area,” he said.

Lander Yutu-2 and Change 4 have already significantly exceeded their design lifetimes of 90 Earth days and one year, respectively. Since its launch from the lander on January 3, 2019, the rover has covered a total of 628 meters.

The Chinese space agency released footage of the spacecraft orbiting Mars on Friday, two days after the successful orbiting of the planet during Beijing’s last space mission.

A video released by state broadcaster CCTV shows the planet’s surface emerging from a pitch-black sky against the outside of Tianwen-1, which orbited the Red Planet on Wednesday.

White craters are visible on the planet’s surface, which turn black in the video when the probe passes over the course of one Martian day.

The five-ton Tianwen-1 (Questions to Heaven) includes a Mars orbiter, a lander and a solar-powered Mars rover, launched from southern China last July.

This is the latest step in Beijing’s space program, which aims to create a crewed space station by 2022 and ultimately send astronauts to the moon, opening a new, extraterrestrial arena for competition between the United States and China.

Tianwen-1 launched around the same time as the US Perseverance mission, which will dock on the planet’s surface in May.

Chinese scientists hope to land the 240kg (530lb) all-terrain vehicle in May on the Utopia Plain, a massive impact basin. The orbiter will last a Martian year.

For a three-month study of the planet’s soil and atmosphere, the mission will take photographs, cartographic maps and look for signs of past life.

The probe has already sent back its first image of Mars – a black-and-white photo showing geological features, including Schiaparelli Crater and the Mariner Valley, a vast stretch of canyons on the surface of Mars.

Mars has proven to be a difficult target: since 1960, most missions sent by Russia, Europe, Japan and India have failed.

NASA’s Perseverance, which is due to land on the Red Planet on Feb.18, will be the fifth rover to fly since 1997 – and it’s all American so far.