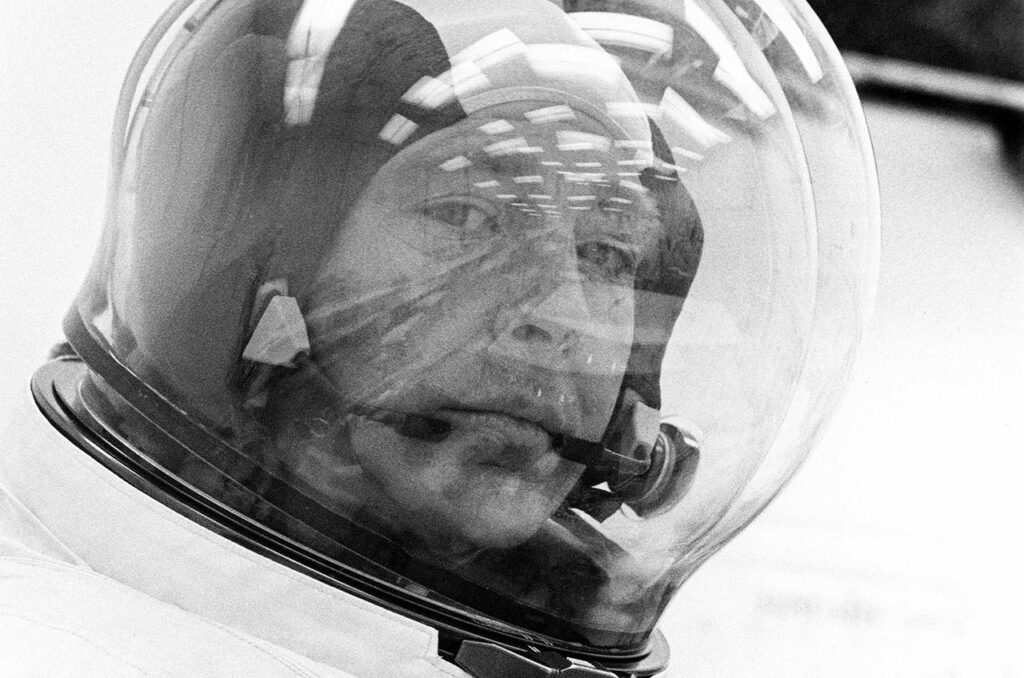 After piloting the Antares lunar module during the Apollo 14 expedition and after becoming the sixth man to set foot on the moon, Edgar Mitchell wrote the following words:

You bring your orders into the global consciousness, while motivating us with dissatisfaction with your own life and the world in general, and forcing us to take appropriate actions. However, from here, from the moon, it seems that interethnic politics does not mean anything. I dream of grabbing every politician by the collar to drag them across a quarter of a million miles and say, Look at this, you sons of bitches.

Mitchell was an astronaut with, let’s say, very controversial views. He was deeply convinced that UFOs not only exist, but that they are indeed alien ships that came to the aid of earthlings. His, for the scientific community, rather controversial views on the issue of aliens on Earth, is often cited in UFO films and is loved by supporters of conspiracy theories. After receiving the Presidential Medal of Freedom from Richard Nixon in 1970 and his retirement two years later, Mitchell announced that governments were hiding information about alien civilizations visiting our planet.

Dr. Mitchell, can you describe what it’s like to be on the moon?

Mitchell: It was an incredible feeling, and of course life changes after that. Any joint work, such as the Apollo 14 expedition, brings me great pleasure. I love it when the work is completed successfully.

Were you worried about the outcome of the expedition following the failure of Apollo 13?

Mitchell: There is always concern and caution. After Apollo 13, we worked on upgrades and fixes. Added a third oxygen cylinder. We felt pretty confident.

You are often cited when describing the “General Representation Effect”. How could you explain this concept to someone who is not interested in space exploration?

Mitchell: You just need to appreciate our role and importance on a scale of the universe. I consider myself a cosmologist. Everyone who studies space, went beyond the boundaries of our home planet and saw it from afar, feel an unprecedented feeling. We are part of a vast reality. It was an important experience for me. I understand now that we are not moving along a single rational path. After the flight, I rethought a lot and realized that our path is not the only correct one.

Have you admired the view of the Earth from the surface of the Moon?

Mitchell: Not much, but we were too busy for that. The land was there, right in front of us. You didn’t have to make an effort to see her. It was rather unusual to watch her in this format. When you see the Earth as part of the sky, your personal views change. My role in the universe has completely changed. I saw myself as part of a larger cosmic reality.

You mentioned rationality. Do you see this phenomenon as an important aspect of today’s society?

Mitchell: We are not on this rational path right now. We only deal with consumption. And often our attitude can be described by the words “I don’t want to know anything about it”.

How do you think we have become such an irrational and indifferent society?

Mitchell: Lack of awareness is one of our mistakes. We shared science and ourselves. Science is strictly materialistic. There is no place for feelings and faith in it. When we move to a more conscious understanding of the other person, there is an opportunity to bring more good. There is no other way.

Tell us a little about the current state of science and why do you think it is wrong?

Mitchell: Matter and energy were the only issues that science has worked with for four hundred years. Reason and consciousness were not part of science and were not considered by it. Science and experimentation is a way to prove laboratory work. There is nothing wrong with that. It’s just science. A way to find tangible evidence of the correctness or fallacy of various theories. This Newtonian approach has alienated science from our daily life.

Love for nature, love for each other – we are only talking about this and what’s the point? We evaluate at the level of personal perception. Science is cruel and indifferent, and the most important thing in life, in my opinion, is serving the highest good. Science must go beyond existing limits. It must be used to understand the Universe at the level of personal perception.

Returning to rationality, how should we approach the problem in order to fix it?

Mitchell: You have to be self-sufficient and use natural resources wisely to sustain your life. And regulate the population! Rationality can only be achieved in the absence of a huge population. Exponential population growth will destroy the planet’s natural resources.

We must understand what resources can become scarce, learn to replace or save them. It must come from each of us. There should not be those who are ahead or lagging behind, or who are not at all. We are in the same boat and we must all be involved and try to fulfill our task in the best possible way. In the next century, as a civilization, we will be in great danger. It is possible to solve existing problems only by serving the common good.

Did you start thinking so after returning from the moon?

Mitchell: Partly yes. But I grew up in a very loving family. We lived on a ranch with many animals. Thanks to this, we understand and appreciate their role in our lives. I took over this position from my parents. The value of life and everything that is in it. Every day, entering the house, the first thing I saw was a photograph of my pony, which I had at the age of 14. I appreciated him as a friend, not as a pet. I learned this attitude from my parents. Love for nature in all its manifestations.

Do you think the ability to appreciate is what the new generation needs?

Mitchell: It’s not just about one generation or another. It’s about all of us. About humanity. I try to live in love and harmony with myself and the world. I feel comfortable, I have a wonderful house, a lot of trees. I hope people will change their point of view. We have children and we have pets and nature. We must learn to treat them as good, because they all make our life beautiful.

Earlier you stated about the repeated presence of inhabitants of other worlds on Earth. Do you still hold this point of view?

Mitchell: Yes. There is a lot of evidence of all kinds. Although their behavior is strange and frightening for us, but on the campaign they are rather not evil, but rather kind and want to help us. From my experience with humans, it is clear to me that aliens are trying to achieve peace on Earth. They have much more advanced technology and we wouldn’t be here for a long time if they were hostile. We are visited by a bunch of alien species. Most of these creatures are not dangerous creatures. They just study us and think about how to establish contact so as not to harm our civilization. And so far they have not succeeded. We also cannot use their knowledge, we only meet with them. The governments of all countries are silent about the presence of aliens on Earth.

Let’s admit it like this. Why do you think this is done?

Mitchell: In my opinion, the only serious reason I think is fear. Fear of seeing an alien form of life and unwillingness to admit that we are not the most important and best creatures in the entire universe. We can’t get along with ourselves either. We are still, at heart, primitive monkeys who are ready to fight to the death for their cave.
Returning to aliens – there are many rumors of varying degrees of doubt, but there are also many publications and studies on this topic. Think what you want, but I am of the opinion that alien life forms exist, have visited and are visiting our planet. Moreover, they may even be among us. The issue is also about money and information control. Governments and powerful people use information and technology only for profit. And they want to control everything.

Former and very unusual in his views on the world, the American astronaut died at the age of 86 in a hospice in West Palm Beach.

As for what the now deceased astronaut said above – draw your own conclusions.

In this article:Edgar Mitchell, moon