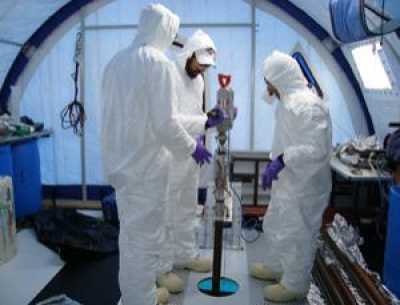 It is seven times as salty as the sea, pitch dark and 13 degrees below freezing. Lake Vida in East Antarctica has been buried for 2800 years under 20 metres of ice, but teems with life.

The discovery of strange, abundant bacteria in a completely sealed, icebound lake strengthens the possibility that extraterrestrial life might exist on planets such as Mars and moons such as Jupiter’s Europa.

“Lake Vida is a model of what happens when you try to freeze a lake solid, and this is the same fate that any lakes on Mars would have gone through as the planet turned colder from a watery past,” says Peter Doran of the University of Illinois, Chicago. He is co-leader of a team working in the Dry Valleys of Antarctica where Vida is situated. “Any Martian water bodies that did form would have gone through this Vida stage before freezing solid, entombing the evidence of the past ecosystem.”

The Vida bacteria, brought to the surface in cores drilled 27 metres down, belong to previously unknown species. They probably survive by metabolising the abundant quantities of hydrogen and oxides of nitrogen that Vida’s salty, oxygen-free water has been found to contain.

Co-research leader Alison Murray of the Desert Research Institute in Reno, Nevada, is now investigating this further by growing some of the extracted cells in the lab. “We can use these cultivated organisms to better understand the physical or chemical extremes they can tolerate that might be relevant to other icy worlds such as Europa,” she says.

Murray and her colleagues were surprised to find so much hydrogen, nitrous oxide and carbon in the water. They speculate that these substances might originate from reactions between salt and nitrogen-containing minerals in the surrounding rock. Over the centuries, bacteria denied sunlight may have evolved to be completely reliant on these substances for energy. “I think the unusual conditions found in the lake have likely played a significant role in shaping the diversity and capabilities of life we found,” she says.

But the existence of life in Lake Vida does not necessarily increase the likelihood that life exists in much older, deeper lakes under investigation in Antarctica, most notably Vostok and Ellsworth, which are 3 kilometres down and have been isolated for millions rather than thousands of years.

“It doesn’t give us clues about whether there’s life in Vostok or Ellsworth, but it says that under these super-salty conditions, life does OK,” says Martin Siegert of the University of Bristol, UK, and leader of an expedition to Ellsworth which set off on 25 November. “We’ll be drilling down 3 kilometres into the lake,” he says.