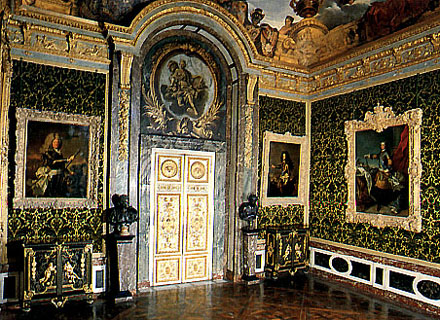 The site of the outrage. The Grand Apartments, Versailles

Today we return to the court of King Louis XIV at Versailles in another odd tale from the memoirs of the Duc de Saint-Simon. Previously we heard from him about an unsettling attempt by a mesmerized girl to scry the death-bed of the Sun King in a glass of water.

Louis XIV’s court was hedged about by ceremony and strict etiquette. The King’s dinner, which was open to the public, was staged in an ante-chamber of the King’s apartments. You may read about the astonishing details of a typical dinner—which might include 40 dishes—here. Onlookers had to bow to the food as it was being conveyed to the King’s table.

Bontems, is Alexandre Bontemps, the King’s “valet,” which is a bit misleading. He was not the King’s “gentleman’s gentleman.” He did not brush the King’s coat or pack his suitcases like an 18th-century Jeeves. He was the Premier valet de la Chambre du Roi, the senior official of the King’s household and he wielded immense power and influence because of his unique access to the King.

The “fringes” were expensive trimmings called (collectively) passementerie, probably of gold bullion and silk, which trimmed the velvet hangings of the King’s apartments as well as some of the furniture and the state bed. The tassel just above is a modern reproduction of a similar trimming, although perhaps not as elaborate. Considering that the King’s food and drink had to be reverenced as if the dishes were the passing Sacrament, it was an almost sacrilegious act to steal the furnishings of the King’s rooms.  Here is the story:

This theft [of horse trappings from the Royal stables] reminds me of another which took place a little before the commencement of these memoirs. The grand apartment at Versailles, that is to say, from the gallery to the tribune, was hung with crimson velvet, trimmed and fringed with gold. One fine morning the fringe and trimmings were all found to have been cut away. This appeared extraordinary in a place so frequented all day, so well closed at night, and so well guarded at all times. Bontems, the King’s valet, was in despair, and did his utmost to discover the thieves, but without success.

Five or six days afterwards, I was at the King’s supper, with nobody but Daquin, chief physician, between the King and me, and nobody at all between me and the table. Suddenly I perceived a large black form in the air, but before I could tell what it was, it fell upon the end of the King’s table just before the cover which had been laid for Monsieur [the King’s brother]  and Madame [the King’s sister-in-law]. By the noise it made in falling, and the weight of the thing itself, it seemed as though the table must be broken. The plates jumped up, but none were upset, and the thing, as luck would have it, did not fall upon any of them, but simply upon the cloth. The King moved his head half round, and without being moved in any way said, “I think that is my fringe!”

It was indeed a bundle, larger than a flat-brimmed priest’s hat, about two feet in height, and shaped like a pyramid. It had come from behind me, from towards the middle door of the two ante-chambers, and a piece of fringe getting loose in the air, had fallen upon the King’s wig, from which it was removed by Livry, a gentleman-in-waiting. Livry also opened the bundle, and saw that it did indeed contain the fringes all twisted up, and everybody saw likewise. A murmur was heard. Livry wishing to take away the bundle found a paper attached to it. He took the paper and left the bundle. The King stretched out his hand and said, “Let us see.” Livry, and with reason, would not give up the paper, but stepped back, read it, and then passed it to Daquin, in whose hands I read it. The writing, counterfeited and long like that of a woman, was in these words:—”Take back your fringes, Bontems; they are not worth the trouble of keeping—my compliments to the King.”

The paper was rolled up, not folded: the King wished to take it from Daquin, who, after much hesitation, allowed him to read it, but did not let it out of his hands [probably for fear of poison on the paper.]

“Well, that is very insolent!” said the King, but in quite a placid unmoved tone—as it were, an historical tone. Afterwards he ordered the bundle to be taken away. Livry found it so heavy that he could scarcely lift it from the table, and gave it to an attendant who presented himself. The King spoke no more of this matter, nobody else dared to do so; and the supper finished as though nothing had happened.

Besides the excess of insolence and impudence of this act, it was so perilous as to be scarcely understood. How could any one, without being seconded by accomplices, throw a bundle of this weight and volume in the midst of a crowd such as was always present at the supper of the King, so dense that it could with difficulty be passed through? How, in spite of a circle of accomplices, could a movement of the arms necessary for such a throw escape all eyes? The Due de Gesvres was in waiting. Neither he nor anybody else thought of closing the doors until the King had left the table. It may be guessed whether the guilty parties remained until then, having had more than three quarters of an hour to escape, and every issue being free. Only one person was discovered, who was not known, but he proved to be a very honest man, and was dismissed after a short detention. Nothing has since been discovered respecting this theft or its bold restitution.

The Memoirs of the Duke of Saint-Simon on the Reign of Louis XIV and the Regency, Vol. 1, Louis de Rouvroy Saint-Simon (duc de)  Bayle St. John, translator, 1900

This Affair of the Fringes is a truly bizarre historical episode. The thing seems to be a physical impossibility: hurling a heavy bundle of stolen goods onto the King’s table without breaking a dish and what is more, doing it in a room crammed with people without being observed. While all eyes were on the King as he dined, one would expect that someone would have noticed his neighbor lifting a bundle of this size.

There is no explanation; and no apparent point. In some ways it is a variation on the Phantom Attacker motif: the slasher or the assailant who does his work and melts away, unseen in the dark. Throwing large or heavy objects with impossible accuracy is also a talent of some poltergeists.  The noise and the notion that the table must have been broken are found in hundreds of ghost/poltergeist stories where witnesses hear a crash as if a piano fell from the ceiling or a cupboard full of dishes fell off the wall, but then find everything intact. The story (in a slightly different translation) appeared in a Spiritualist publication in 1881 under the heading “Was it a Freak of Spirit Power?”  The wonder-lover in me would like to think that the note was some very early spirit writing or that a poltergeist was tossing tassels at Versailles, but it was perhaps more likely to have been some insider’s job of spite against the King or Bontemps. One would have expected the King to act more startled when a bundle came hurtling down onto his table. Was he expecting it? Or was his non-reaction simply the King’s usual imperturbable demeanor?

Tuesdays are not my day for reading French, so I’ve not carefully proofed the passages below, which I cut from the Memoirs online.  But you will see that the translation above is far from exact.