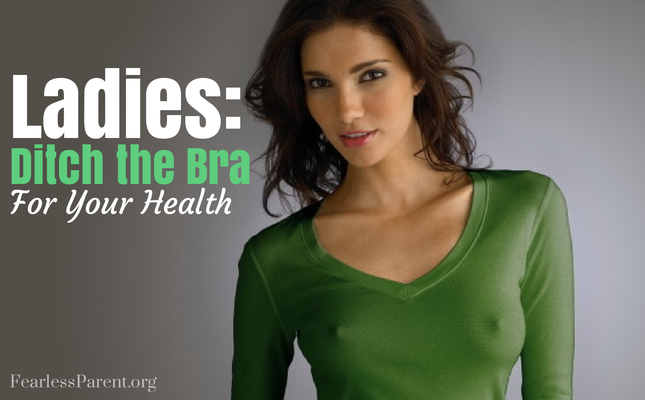 I realize it may feel some combination of uncomfortable, unprofessional, or unnecessarily provocative. Societal convention has most of us trussing up before going out.

If you are reading this at home, do me a favor and unhook. Then keep reading.

Dressed To Kill: The Link Between Breast Cancer and Bras

Sydney Ross Singer and Soma Grismaijer authored a book called Dressed To Kill. They interviewed 4,000+ women in five major U.S. cities over two years. Half the women had been diagnosed with breast cancer. They found:

A 1991 article in the European Journal of Cancer found that premenopausal women who do not wear bras had half the risk of breast cancer compared with bra users. The data also suggest that bra cup size (and breast size) may be a risk factor for breast cancer.

Cancer Is Not a Disease

Andreas Moritz revealed that Japanese, Fijians, and women from other cultures were found to have a significantly higher likelihood of developing breast cancer when they began wearing bras. His book explains how cancer is an adaptive healing mechanism, arguing that people would die more quickly if the body did not form cancer cells.

Japanese researchers found they can lower melatonin by 60%. Melatonin has anti-cancer properties. And Spanish researchers wrote about the use of melanonin in breast cancer prevention and treatment.

There’s No Downside to Being Cautious.

Am I suggesting this scanty fact base offers definitive proof of a causal relationship? No.

Am I suggesting you should be comforted that the National Cancer Institute, the American Cancer Society, and the New York Times all believe it to be bunk? No.

That’s a longer discussion, but it’s sufficient to say that politics and economics create active bedfellows and the absence of a commercial imperative might have something to do with the dearth of research.

Many of us don’t need to wait in order to do something that intuitively seems to make a lot of sense. Frankly, in view of the alarming rate of breast cancer prevalence in this country (12.3% of women) and the growing trend to remove body parts in an attempt to improve our odds, it seems we might be receptive to a bit of behavior modification.

Go braless as much as possible.

It actually gets easier. When these muscles and ligaments are forced to bear the weight of our breasts, muscle tone returns. The more you wear a bra, the more you need to wear a bra. Chest muscles and breast ligaments atrophy, which then makes it feel uncomfortable to go braless.

A 15 year French study conducted by Besancon CHU professor Jean-Denis Rouillon found that “medically, phyisiologically, and anatomically, breasts gained no benefit from their weight being supported in a bra.” There was some evidence that eliminating bra use helped ease back pain. He described bra wearing as a “false need.”

Remove your bra when you get home. Don’t wear a bra to bed. And if you’re self-conscious when going out, try wearing camisoles, thicker material, or nipple pads. It does make sense to wear a support bra while exercising.

Tight bras and underwires restrict lymphatic drainage, promoting congestion and stagnation of toxic waste materials that are supposed to be flowing out for excretion. Further, the closing of lymphatic vessels reduces the delivery of oxygen and nutrients to the cells.

Michael Schachter, MD, FACAM wrote that bras and tight clothing can impede lymph flow and contribute to the development of breast cancer.

John MacDougall, MD wrote in The Lancet that repeated inflammation from constricting bras are implicated in painful breast cysts and lumps, scar tissue develops, and milk ducts become plugged, all of which is associated with a higher risk of breast cancer.

The metal in underwire bras can create an “Antenna Effect” according to the father of Applied Kinesiology, George Goodheart, DC. Repeated pressing of metal over an acupuncture point can cause longer-term stimulation of neuro-lymphatic reflex points corresponding to the liver, gallbladder, and stomach. “It will likely make her sick; slowly and quietly,” said John Andre, ND, DC.

Slide the Wires Out!

There’s no need to toss your expensive underwire bras. If you cut a small opening at one end of the wire, you can manually remove it from each cup. You’ll probably find that your bra supports you nearly as well without them. Oh, and don’t be fooled. They make look like plastic, but they’re actually plastic-coated metal. If you find you still need the support, you can buy and insert plastic wires. Andre explains how.